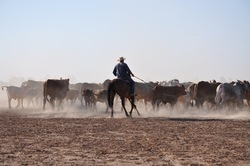 One of China’s largest beef producers is looking to buy up to $100 million worth of cattle property in Australia over the next 12 months.

Chongqing Hondo Agriculture Group president, Qin Ya Liang, attended Austrade’s Australian Beef Industry Seminar in Brisbane on Thursday where he told The Australian Financial Review his company was looking for investments in farmland and abattoirs.

“We are here looking for investments in cattle farms – the bigger size is good,” Mr Qin said through an interpreter.

“We will look to invest in partnerships with corporate farmers but we will take percentage investments in medium and small enterprises as well.”

Mr Qin, who operates three large commercial feedlots in China producing about 110,000 head of cattle a year, is part of the growing beef business in China, whose overall volume accounts for over 10 percent of global beef output.

“I like Australia because there are big farms and we are wanting to increase our consistency of supply,” he said.

“We have not made an investment yet. We are still looking. We think we will invest between $50 million and $100 million within one year,” he told the AFR.

The scale of Chinese investment looking to invest in Australian cattle stations and the beef supply chain is substantial and is starting to build momentum.

One of China’s top 500 companies, Hailiang Group, purchased more than $40 million worth of cattle and cropping land east of St George in southern Queensland in March, while another group, Yiang Xiang Assets last year purchased Allan Myers Elizabeth Downs cattle station for a price believed to be more than $11.5 million.

Austrade’s trade commissioner in Chengdu, Jeff Turner, told AFR the line-up of Chinese interests was extensive with as many as 300 Chinese cattle and cattle-related companies looking to invest Australia.

“They are interested in everything from production and farms and the whole supply chain,” Mr Turner said.

“Deals are starting to get done much more quickly but Australian cattle producers need to still do the fundamentals, for example you still need to have Guanxi – the relationships.”

The Austrade seminar, sponsored by agency Colliers International, was the first leg for a visiting Chinese delegation which will attend the national Beef 2015 national beef exposition starting in Rockhampton today.

“It is also notable that a number of significant deals have been made across the north by Chinese investors,” he said.

“Asian market opportunities and the depreciating Australian dollar have begun the process of revival for many sectors of Australian agribusiness.”

Chinese nationals make up almost half of the 830 international delegates registered to attend Beef 2015, through the event’s International Handshakes program.