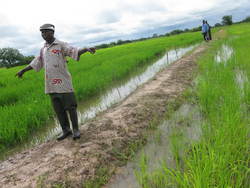 Mr Fifi Kwetey, Minister of Agriculture, has given the assurance that government would provide the leverage to ignite and link up the value-chain in the production of rice and cassava.

The policy backups, such as, a mandatory percentage cassava flour inclusion in wheat flour, should bring real spread-out opportunities along the chain, he stated

Mr Kwetey made the remark at Hodzo near Ho on a two-day familiarization tour of selected key agricultural firms in the Volta and Eastern Regions.

Rice and cassava production were game changers, he stressed, adding, the two, could change economic fortunes of individuals and the nation.

The Minister, on the first day visited the Brazil Agro-Business Group Limited, producers of rice on the vast plains around Kpenu, near Dabala and the Caltech Ventures Limited, which is in cassava production and processing at Hodzo, near Ho.

Mr Kwetey, on the second day visited the rice fields of the Ghana Commercialization of Rice Programme (G-CORP) at Asutsuare.

G-CORP is an Alliance for Green Revolution in Africa (AGRA), a funded farmer-support project.

The Minister also undertook a tour of the 1,200 hectare banana fields of the Golden Exotics Ghana Limited, a French banana export firm, sprawling the vast savannahs around Asutsuare.

At all the stops, the Minister promised to actively tackle challenges faced by the firms, including tax rebates, spares for machinery land acquisition and access roads.

Mr Chris Quarshie, Managing Director of Caltech Ventures, said the company had been in business for nine years.

He said current potential was 3,000 hectares cropping, but was doing only 1,000.

Mr Quarshie said the company was expecting machinery after which, it would start the production of the derivatives on large scale.

Some of the derivatives are ethanol and flour.

Mr Quarshie, who took the Minister round the farms and the industrial production unit, told the excited Minister that, producing cassava derivatives locally, could save the country half a billion dollars and more annually.

Mr Roberto Jaconi, General-Manager Brazil Agro-Business Group Limited, briefing Mr Kwetey through an interpreter, said production was only 15 per cent of the expected 3,500 hectares, because there was slow response to requests for tax exemptions as incentives for machinery and other essential supplies.

He said Ghana had huge potential in rice production, but the produce must be “treated and promoted with the same parameters of quality as the imported rice”.

Mr Jaconi believed that in the future “rice production will play a strategic role in the economic and social aspect of the country”.

Both the rice and cassava enclaves, have out- grower schemes, which bring along scores of locals into production.

He said harvest was largely manual and that almost all equipment supplied the Cooperative Group, had broken down.

The indication was that the Kpong Irrigation Dam was getting rickety, with pipes choky.

Moses Adenusi, Project Co-ordinator of G-Corp, which provides, services for farmers and farming groups across the country said there was the need for farmers to have guaranteed source of quality rice seeds.

He said brokered deals with millers against produce of farmers, under the aegis of G-Corp, had kept rice fields busy and the chain bustling.

Mr Peter Ajoeh, Agronomic Manager Golden Exotics, Ghana Limited, who took the Minister round the expansive banana fields, said plans were being pursued to eventually produce more and more of organic bananas, as the company had started the production of compost manure on site.

He said the company which produces 90 percent of export banana in Ghana was Fairtrade certificated.

Mr Ajoeh said difficulty in the acquisition of land was delaying expansion of the farms.