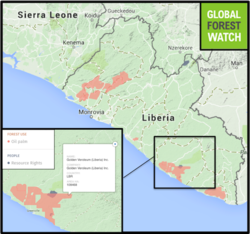 A map from Global Forest Watch identifies areas set aside by the government for oil palm and for community forests in Liberia. Oil palm concessions cover more than 20 times as much land as community forests.
Local land rights may be in danger from push for palm oil in Liberia

The rights of local and indigenous peoples aren’t being adequately protected in the drive for economic development, according to a report published in February by the Rights and Resources Initiative (RRI), a coalition of forest-oriented organizations. For a place like Liberia, reeling from both decades of persistent poverty and the recent Ebola epidemic that’s estimated, according to the World Bank, to have chipped hundreds of millions of dollars from the region’s economies (if not more), economic development seems critical at just about any cost.

“Our land can provide the foundation for this recovery, but only if we have the rights to it,” said Silas Kpanan’Ayoung Siakor in a release from the RRI. “We need to protect our forests and rebuild our country, with a focus on our people first.” Siakor founded the Sustainable Development Institute, based in Liberia.

The quest to meet the world’s demand for products like palm oil is seen as a way to involve developing economies in the global economy. The report “Industrial Oil Palm Development” points out that since the 1980s, the World Bank has invested some $2 billion in palm oil alone.

But significant investments in agricultural production and trade don’t always translate to benefits for developing economies or their people, as evidenced at the epicenter of palm oil production in Southeast Asia, writes author Matthias Rhein of the management consulting firm Seventy Three based in Singapore.

"Counter to popular perception, the palm oil sector has added little real value to the Indonesian economy,” the report states. Indonesia presently owes only about two percent of its gross domestic product (GDP) to oil palm.

Compared to the big, industrial-sized oil palm plantation model that now predominates in Malaysia and Indonesia, smaller-scale producers actually bring more to the bottom rungs of those countries’ economies. They provide more and better paying jobs than plantations do, according research cited in the report. What’s more, the land rights stay in the community, instead of with large – and often foreign-owned – corporations looking to use economies of scale of large production plots to generate profits for their investors.

The trend has been away from companies negotiating land use with local populations and instead with state governments that have centralized control of the country’s land rights. According to the report, “Customary rights and property, the departure point of the land acquisition and administration process, have now been replaced by contracts based on state law.”

That may mean the subjugation of local rights, many of which have been legitimized by centuries of custom. “When it comes to palm oil, there are no positive outcomes for our communities so far,” said Mina Setra in the press release announcing the report’s publication. Setra is the deputy secretary general of the Indonesia's Indigenous Peoples' Alliance of the Archipelago. “Companies violate our rights, break the laws, pollute the environment, and never share any of the profits. Criminalization to community members and violence still happen today. This is not an economic model that any other country should adopt.”

The leadership in Liberia, argue the report’s authors, seems more concerned with the profits from large-scale palm oil producers than with the needs of local communities. "Liberia’s focus on palm oil and other raw commodities devastated its rural communities and their ancestral forests, and then Ebola hit,” Siakor said. “Now that Ebola is receding, oil palm companies are already accelerating the land-grabbing again.”

Instead of staking the success of Liberia’s economy on palm oil, the price of which has dipped more than 40 percent in the past four years, the Rights and Resources Initiative contends that investing in small-scale farmers to help them move from subsistence farming into cash crop production is the way to “upgrade” developing economies.

An accompanying publication, “Looking for Leadership,” warns that the current push from the international community to pay governments to maintain forest and the carbon that they hold also risks casting local land rights aside.

“For centuries, governments have been handing out Indigenous Peoples’ forests to supply the next commodity boom—whether rubber, oil palm, cattle or soy,” said coordinator Andy White in the release. “The carbon market is the next global commodity from tropical forests and, once again, there is a major risk that Indigenous Peoples are not recognized as the owners of the forest.”

RRI says the current laws of many of the countries that the World Bank has said are “ready” to sell carbon don’t stipulate the way in which carbon will be traded, nor do they define who owns those rights. Further exacerbating the situation for local and indigenous groups is that many countries claim the lion’s share of forest as the property of the government. The Democratic Republic of Congo, for example, holds that all of the country’s forest is under government control.

“We’ve got to learn this lesson: you can’t get democracy or development, and you can’t stop deforestation, without respecting citizens’ human rights, including local peoples’ rights to their land and forests,” Andy White said in the release.