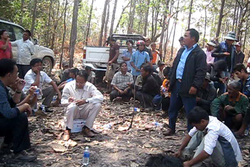 More than 200 representatives from four villages in a remote northeastern Cambodian province refused on Tuesday to accept gifts from a land concession company in exchange for clearing their communal land to make way for a rubber tree plantation, local residents said.

Charai Pouy Heang, an indigenous village representative, told attendees at a meeting between local authorities and community members in the O’Yadaw district of Ratanakiri province that the villagers would not accept any gifts in exchange for allowing the company, Henh Heap Investment, to clear 30 hectares (74 acres) of communal land there.

“We are afraid that company will confiscate our cows and buffaloes that are grazing and prevent us from accessing the land,” he said, adding that villagers also used the forest area to grow wild fruit.
In 2009, Cambodia’s agriculture ministry gave privately owned Henh Heap Investment a license to lease 7,000 hectares of land in Ratanikiri for 70 years to grow a rubber plantation.

But villagers say they were not informed about the land concession or that their communal forest had been given to the Cambodian company.

Villager Rocham Hoeun said local residents did not know anything about the concession.
“The government didn’t consult with us about the impact” of the land clearing before granting the company the land concession, he said.

He said representatives from Henh Heap Investment never visited the forest until Monday when they brought 100 cases of instant noodles, 100 packages of the food additive MSG, and 100 packages of salt for villagers as company representatives informed them that they were going to clear the land.
“Villagers refused to accept the gifts under the conditions because they are afraid of losing their land,” he said, adding that the locals left the meeting without accepting the items.

The right to clear land

Rocham Dek, head of Yatong commune in O’Yadaw district, said local authorities could not force villagers to give up their land to the company because the villagers decided not to agree to it.
“We can’t make any decisions because the community isn’t giving up the land,” he said.

He said he would consult with other authorities to take further action.

“The company hasn’t cleared the land yet; it has only informed villagers,” he said.

For years the Cambodian government has encouraged the development of rubber plantations and granted land concessions to local and international companies to grow rubber for export, drawing criticism from both environmentalists and rights groups about environmental damage and land grabs.

Some of the concessions have included land traditionally possessed by Ratanakiri's indigenous peoples, whose loss of land prevents them from making a living off subsistence agriculture.