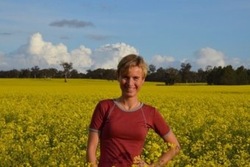 Dr Marit Kragt is an assistant professor at the School of Agriculture and Resource Economics at the University of Western Australia.

Dr Kragt said the research drills right down for a grassroots perspective on the subject and involved bankers, property managers, government department staff members as well as farmers.

"The most interesting results were from the farmers," she said.

"We expected them to be quite critical of foreign investment, we expected people to say 'oh they're buying up our land and there's all these foreigners coming to work on the farms,' but that wasn't the case at all."

"If you're just starting out it might be positive to have foreign investment if you're able to lease a foreign owned farm or foreign owned land, because you won't have to actually buy the land yourself."

The research revealed established farmers only had one reservation about foreign investment.

"There was some feeling that property prices might rise if there's a lot of foreign investment in the region, so for farmers looking to expand and purchase land that would be a bad thing," Dr Kragt said.

"But we mostly heard from farmers looking to sell and were really pleased with the foreign investment because it was easier to sell a large property to a foreign investor especially if it's a large business, corporate investor and they also had the perception they may get a better price.

"We even expected that there might have been some disadvantages in terms of environmental management because it's a corporate business they're not going to care too much about the natural resource management in the region and even that was mentioned as something foreign investors did very well, managing their natural resources.

"A lot of the farmers said, 'it's great having these corporate business because they hire the local farmers, they hire local farm managers, they buy the inputs as much as they can from our local area and they actually generate jobs for our kids and people who want to get into farming without having to buy a farm on their own'."