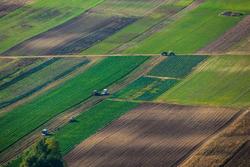 The EU is currently witnessing a massive land grab, which has a direct impact on 25 million of its citizens, changing the way lands are being managed and how food is being produced, writes Attila Szocs.

Attila Szocs is Romania correspondent for Arc2020, a platform for civil society and non-governmental organisations interested in good food, farming and rural policies for Europe. He is also campaign coordinator on land grabbing with EcoRuralis in Romania.

Finally, it appears, the phenomenon of land grabbing is officially on the European table. On 20th of January, 2014 – UN Year of Family Farming - the European Economic and Social Committee (EESC), decided to draw up an own-initiative opinion on land grabbing in the EU.

After consulting a range of public, private and civil society actors, and conducting a fact-finding mission in Romania, it organised a public hearing on 4 November in Brussels, to discuss the preliminary draft opinion Land grabbing – a wake-up call for Europe and an imminent threat to family farming.

Let's note the milestone here – the hearing was not just about land concentration and ever growing farm sizes, but about land grabbing, where a finite fundamental resource – land - is captured and controlled by corporate interest with strong repercussions over the development and perpetuation of local farming communities and indeed whole countries.

The EU is currently witnessing a massive land grab, which has a direct impact on 25 million of its citizens, mainly small-scale farmers, changing the way lands are being managed and how food is being produced. The rush for land especially hit new member states like Romania and Bulgaria, but also other Eastern European countries, concentrating millions of hectares of farmland in the hands of a few multinationals, banks and private investment funds.

As the EESC fact finding mission concluded, Romania is an example of a “perfect storm”. In its transitional economy, access and control over strategic resources floated from a communist regime towards local oligarchs, and then to corporate businesses.

I joined the EESC delegation on their visits to public authorities, industry representatives and large farming enterprises. They were astonished by the scale of land grab in Romania (several millions of hectares controlled by multinational companies), the dimension of some super-sized farms (Romania currently holding the largest crop farm in the EU – almost 70,000 ha), the ignorance on display with regard to EU regulations, and, concurrently, the excellent contacts with the Romanian Ministry for Agriculture.

Although the rhetoric favors family farming, the government is in reality pushing on with the development of agro-industry. In its program, it clearly states its wishes to move towards very large scale, export-oriented agriculture and authorities must take “measures for merging and reducing the number of agricultural exploitations”. Furthermore, Common Agriculture Policie’s (CAP) Rural Development Funds are earmarked to overstimulate selling or long term leasing of lands owned by smallholders.

Looking at the distribution of income and wealth disparities (“Gini” coefficient) through the poverty and land ownership prism, one can observe a well defined overlay between acute poverty and large land ownership. In 2012, the poverty and social exclusion rate of Romania reached to 42% of its population (the EU average being 25%), a figure that is rising continuously, placing Romania amongst the poorest countries in the EU. The poorest regions of Romania are the North-East, South-East and South-West, areas especially affected by strong agricultural land consolidations and land grabbing: it may seem hard to believe in the 21st century EU, but grown men can end up working 12 hours a day as farm labourers on mega-farms in Romania for a loaf of bread.

A legitimate question arises: Can EU market mechanisms be a basis for developing social policies?

CAP subsidies haven’t helped much. In Romania, 50% of the direct payments went to just 1% of the farms, while many Eastern European states show similar statistics.

Moratoriums on land sales failed to deliver. As lands owned by new member states were too attractive, loopholes were quickly found. Either taking over existing portfolios, or registering new companies, millions of hectares were acquired or leased in Eastern European member states by foreign investment funds over the last 7 years. As of 2014, these mechanisms have ended, so 2014 is both the year of family farms and of the free movement of capital into Eastern EU agricultural land.

Still, given the underdevelopment of the Eastern European countryside, coupled with the low prices of lands and the perception of wide-spread corruption, an option for new member states would be to extend and better define their moratoriums. This process would challenge the EU accession treaty, but also challenge the agribusiness sector, which is the biggest beneficiary of the weak and ill-defined policies.

The EESC brings similar recommendations: while keeping the focus on fair access to land and resources, the Committee calls on the European Authorities to discuss whether the free movement of capital into land acquisitions should be unrestricted. In the EESC view “the member states must be given more opportunities to regulate and limit their respective markets for agricultural land.”

While this last suggestion is promising, let's not forget that the tools to prevent land grabbing in Eastern Europe will be put in the hands of the same politicians who are promoting it. Like an old Balkan saying says: Let's not let the mice guard the cheese.