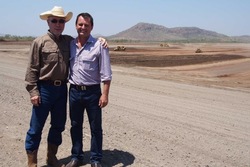 The Chinese company willing to invest $700 million in Australia's far north is still waiting to access land in the Northern Territory so it can develop a sugar industry in the Ord Irrigation Scheme.

Pressure is mounting on the Northern Territory Government to make land available on its side of the Ord expansion project, and it appears to be struggling to progress environmental approvals and negotiations with the Indigenous Traditional Owners.

The Chinese-owned Kimberley Agricultural Investment (KAI) won the rights to lease and develop Ord Stage 2 back in 2012, and has been quickly developing land near Kununurra with a view to planting interim crops next year (sorghum and chia).

The expectation that further land in the Northern Territory would now be available has not come to fruition, and is causing issues and creating uncertainty for KAI.

"So if land isn't available, then there's a delay in the process and we have to manage the interim between what we've got now and what we'd like in the future, which becomes fairly risky from an investor's point of view."

Mr Engelke says KAI's intention has always been to build a new sugar mill in the region, capable of processing three to four million tonnes of cane per year.


AUDIO: Jim Engelke talks about KAI's frustration over delays to accessing Ord land (ABC Rural)
He says the current amount of land available is not enough.

When asked how long KAI could wait for more land, Mr Engelke says the company does not want to wait at all.

"We'd like not to wait and move seamlessly from one step of the process to the next," he said.

See also the Wall Street Journal video: Chinese Firm Sees Payoff in Australia's Farmland
"We don't want to be in the game of shutting down land development and clearing operations, and then trying to restart them.

"And from a [farm] design point of view, we'd like to have all of the pieces of the puzzle on the table, so you can make the most efficient job of the development as you can."

Speaking at last week's Food Futures Conference in Darwin, the Territory's Minister for Primary Industry, Willem Westra van Holthe, said the Northern Territory was 'moving as quickly' as it could to release Ord Stage 3 lands.

"In the Territory, we're now moving towards being able to go to the negotiating table on Native Title in good faith," he said.

"We haven't put a deadline on it, but we're moving as quickly as we can.

"We need to bring Traditional Owners and the Land Council along with us for the ride. We want them to be a part of this process.

"We're aware of the commercial realities... but it's important to get the process right to make this a successful and sustainable [project] rather than trying to bulldoze our way through."

Sugar the perfect crop for the Ord

The Ord's sugar industry collapsed in 2007 for a number of reasons, including a lack of scale.

"That's a fairly big ask and certainly without the land in the Northern Territory and even the land owned by CPC (Consolidated Pastoral Company), it can't really work."

"The Ord. on my numbers, could be as cost-competitive as Queensland and areas like the Burdekin," he said.

"Sugar has been proven in the region. It's a longevity crop that's withstood pest and diseases, it's got good resilience, it's a good broadacre crop. It just needs scale.

"I personally would be very uncomfortable with a mill that couldn't meet three million tonnes a year, which means you need 27,000 to 30,000 hectares of land.

"They [KAI] quickly need access to [at least] the 27,000 hectares, because at the moment they're waiting and talking about doing sorghum and perhaps freighting that to China, which would be a loss-making operation.

"They need access to that land and the [Wyndham] port needs to be upgraded to take 50,000 tonne ships.

"As an outsider, it dismays me that we have not made that land access a lay-down misere, there's still people not sure, land rights haven't been sorted out.

"If the absolute rifle-focus is there, we can sort these things out, but it has to be done quickly."

Mr Hanlon says KAI's long term plan is to export sugar to China, but demand from Indonesia is an obvious starting point.

"Indonesia in my view, is probably the most promising sugar market in the short to medium term," he said.

"China will always be important and will steadily grow, but Indonesia desperately needs sugar."

Aspiring to expand the Ord Irrigation Scheme to 100,000 hectares

Speaking at the Food Futures Conference in Darwin, the director of the Ord Expansion Project, Peter Stubbs, said 100,000 hectares should be the aim for the Ord Irrigation Scheme.

"And that is still a mosaic development in the context of northern Australia," he said.

He said the imaginary line known as the WA/NT border was causing unnecessary challenges, and the environmental approval given to Ord Stage 2 in Western Australia should be extended immediately to Ord Stage 3 lands in the Northern Territory "because it's the same land".

Mr Stubbs said KAI had made an impressive start to developing Ord Stage 2 and there were three main things Governments could do to assist the expansion.

1. Release first stage of the NT lands next year (2015). Allow the developer to sort native title and approvals. It's critical to ensuring the success of the current WA/KAI investment.

2. Fund engineering designs to increase the storage of Lake Argyle Dam by 50 per cent (5,000 gigalitres). Preliminary design work of raising the spillway by 4 metres estimates it will cost $80 million. This work will be needed well before the extra water is needed for irrigation, because it's essential to investor confidence to take on development of the NT lands.


3. Build a new bridge over the Ord River at an estimated cost of $150 million. The Australian Government has invested $10 million in creating the highway reserve, approvals and design for this.

"What's significant to the [Ord] project is scale for KAI," he told ABC News.

"It's very important to the state and to others that we can keep that pipeline of development happening to ensure that we can get them to the scale they need to have the sugar mill processing happening."

Mr Redman said he was conscious of current land limitations and was working to ensure the release of land across the NT border remained on the agenda.

"We are doing what we can as a state (WA), and bear in mind that's not our jurisdiction, so we can talk and we can encourage, support and lobby and we're doing that," he said.