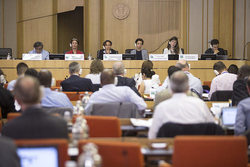 The Principles fall short of many of the standards set out in other existing industry-led voluntary initiatives and company commitments.
Global Witness | 30 October 2014

The adoption last week by more than one hundred governments of the UN’s Principles for Responsible Investment in Agriculture and Food Systems should have been cause for celebration.

But from where I was sitting at the back of the room along with the rest of civil society this ceremony was a sombre affair. After a painstaking two-year negotiation process, the Principles lack the power to change the status quo, whereby corporate profit trumps human rights and the environment.

The ten voluntary Principles are designed to encourage investments in agriculture which improve food security for the world’s poorest people and curb the current wave of land grabbing. They cover a huge range of issues from preventing environmental damage and human rights violations to protecting the rights of small-scale food producers, women, and agricultural workers.

I began working on the Principles for Global Witness in 2012. Part of a global coalition including smallholder farmers, trade unions, and indigenous peoples, we tried to bring the voices of those most affected by hunger to the far-removed halls of the UN Food and Agriculture Organisation (FAO) in Rome.

These are the people with first-hand experience of the devastating impacts of large-scale agriculture. Today, almost one in six people around the world are still going hungry. Governments have failed to support small-scale food producers who still grow 80% of the food consumed in Africa and Asia. Meanwhile private companies have been grabbing fertile land to grow crops such as rubber, sugar and palm oil. As much as 49 million hectares of land has changed hands in the last decade, robbing many of the world’s poorest people of their homes and livelihoods.

With civil society and the private sector both negotiating alongside governments, the process gave the impression of equality; but global power dynamics were very much at play. Our civil society coalition was consistently marginalised during the talks, often denied their speaking spots or cut short while the private sector and many governments persisted in weakening the Principles to defend their own economic interests.

This imbalance is written into the document. Human rights and environmental protection are paid lip service but ultimately undermined by repeated references to international trade agreements which trump all else. As a result the Principles fall short of many of the standards set out in other existing industry-led voluntary initiatives and company commitments.

For example, the right to say yes or no to an investment (known as Free Prior Informed Consent) was granted solely to Indigenous Peoples, despite companies like Coca Cola having already committed to applying it to all affected communities. The Principles also fail to condemn land or water grabbing or even mention the millions of landless people struggling to survive.

They do contain some positive points however. Investments in agriculture, particularly in developing countries, are currently conducted behind a wall of secrecy. This means that citizens usually have no idea who is investing in land, let alone how to get justice for any damage caused. For the first time, these Principles lay out clear expectations that agricultural investors share information not just once a deal has been signed but beforehand, so that potentially affected people can be involved in decision-making. They also describe how to measure and remedy the potential negative impacts of investments, acknowledging that if impacts are deemed to be too great then the investment must not happen. This is a crucial shift in mind-set away from the current situation where every investment goes ahead regardless of its consequences.

The UN’s Principles for Responsible Investment in Agriculture and Food Systems lack both the teeth and vison needed to drive real change on the ground, particularly given many governments’ and companies’ track record of ignoring voluntary commitments. If we are serious about feeding the world without trashing human rights and the environment then we need strong, binding regulations. Voluntary commitments are simply not going to cut it.