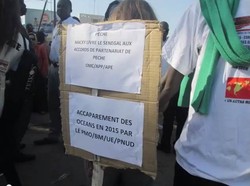 We, civil society organizations engaged in the defense of the rights to land and water, we gathered in Dakar in the framework of the Africa Social Forum fighting and protesting against natural resources grabbing, namely water and land grabbing, and against the systematic violations of the human rights that accompany them. By sharing our ideas, we acknowledged the essential linkage between our struggles, given the inextricable nature of land and water grabbing.

Today, more than 200 million hectares of land have been supposedly grabbed globally. Thus the huge profits of an elite are built on the systematic violation of the rights of the majority of peasants, farmers, informal settlements' dwellers, fishermen, herders and nomads, who are dispossessed of their land and livelihoods by resort to violence, intimidation and torture. Land grabbing is always accompanied by water grabbing. Indeed, water grabbing occurs in all instances of unsustainable water-consuming farming, through the privatization of water utilities and management, the contamination of water brought about by uncontrolled mining, the eviction of communities for dams building, the militarization of access to water points, the dispossession of fishermen and shepherds of their livelihoods, and the penalization of water poverty. The criminalization of activists fighting for the protection of the commons has become widespread, albeit hidden by the authorities. Land and water resources are increasingly scarce, and therefore critical to the security of societies and the sovereignty of states. However, the scarcity underpinning the water crisis and the land crisis is not naturally given; instead, it is politically, geo-strategically and financially constructed.

Our solidarity is built upon the following principles and convictions that unify our struggles:
1. That, the human rights to water and land are fundamental, and crucial for life. Everyone, men and women, adults and children, rich and poor, is entitled to them.
2. That, water and land are not only vital natural resources, but are also part of our common heritage, whose security and governance must be preserved by each community for the common good of our societies and the environment, now and for future generations.
3. Water and Land are commons, and not commodities.
4. We recognize that the states are legally and constitutionally mandated to represent peoples' interest. States are therefore duty-bound to oppose every national policy and international treaty that contrast the human rights to water and land.
5. Management policies of land and water should promote the achievement of social justice, gender equality, public health and environmental justice.

That is why, together as civil societies in Africa and elsewhere,

we pledge ourselves to:

We call on the states:
We call on states and international governmental organizations:
We call on civil society, social movements, NGOs and trade unions from the Africa Social Forum to endorse this declaration and support its claims by all available means. We need to foster the solidarity of our struggles, including the struggle for our rights to access the essential resources required for life, we need to make civil society’s voice heard in the negotiations towards the adoption of the Sustainable Development Goals of the UN Agenda post-2015, in the application of international and regional guidelines on land tenure and natural resources, and the COP 2015 for the protection of the environment.

Next meeting in Tunis should enhance the convergence of our struggles, assess progress and identify the way forward