Not so mega? The risky business of large-scale public-private partnerships in African agriculture 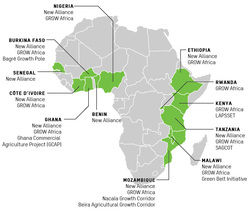 Not so mega? The risky business of large-scale public-private partnerships in African agriculture

Oxfam policy adviser Robin Willoughby shrugs off the big ag groupthink and argues that the current trend of mega projects in African agriculture is a risky and unproven way to help poor farmers.

Last week, I attended a large summit on the future of African agriculture in Addis Ababa, hosted by A Green Revolution for Africa (AGRA).

My participation really made me reflect on the problems of ‘groupthink’ within these types of conference, with each of the participants taking it in turns to stand on the podium and agree with one another more and more vociferously. The buzzwords were ‘investment opportunities’, ‘transformation’ and ‘public-private partnerships.’

This narrative is to be expected at a private sector agri-investment conference – but seems confusing when this type of meet-up is designed by philanthropic organisations to address rural poverty and the widespread challenges in African farming. Despite the worthy aims of AGRA, discussion of poverty, rights, gender or inequality was almost entirely absent from the plenary.

As one of the other participants said to me: “if everything is going so well – why are we all here?”

At the summit, I launched an Oxfam Briefing Paper on large-scale public-private partnerships initiatives, which echoes some of these themes.

The report points out that despite the large amount of hype around mega-PPPs such as the New Alliance for Food Security and Nutrition, GROW Africa, and numerous growth corridor initiatives – there is very little robust evidence on the proposed benefits of these arrangements, around who bears the risks or who holds the power in decision making.

So where do the risks and benefits lie?

Moral-Hazard fig 3 map 060814The paper shows that public-private partnerships can play an important role in supporting farmers. For example, smaller-scale initiatives such as micro-credit, weather-index insurance and attempts to link farmers into markets offer useful examples of PPPs – particularly when they are co-designed with end-users and local communities.

Oxfam’s work with consumer goods company Unilever in a targeted partnership called Project Sunrise shows that well-designed partnerships can also be used for innovation and learning.

But the risks of mega-PPPs are enormous, particularly in the areas targeted for investment.

Land transfers are a core component of the mega-PPP agenda. The total amount of land pegged for investment within just five countries hosting growth corridor initiatives (Tanzania, Mozambique, Malawi, Ghana and Burkina Faso) stands at over 750,000 km² – the size of a country such as France or Ukraine.

Not all of this land will be leased to investors, but the initial offering in these countries stands at 12,500 km² (over 1.2 million hectares) – the amount of land currently in agricultural production in Senegal or Zambia.

In the context of weak land governance and insecure land tenure (estimates suggest that only 10 per cent of rural land in Africa is registered), there is a serious risk that mega-PPPs will lead to the dispossession or expropriation of local communities in the name of investment.

The pricing of land can also be set at extraordinarily low levels. The GROW Africa initiative advertised land for lease in Mozambique for $1 per hectare per annum over 50 years. This is around 2,000 times cheaper than comparable land in Brazil – raising concerns that African governments are seriously undervaluing their core assets.

Inequality is already significant in Africa. Measurements such as the Gini-coefficient show that inequality on the continent is second only to Latin America in its severity.

Land transfers to investors threaten to worsen this inequality by creating ‘agricultural dualism’ between large and small farms. This process will remove china_zambiafriendshipfarmcropalready diminishing plots of land from family farmers; while the co-existence of large and small farms has been shown to drive inequality and conflict in other contexts.

Mega-PPP projects are unlikely to deliver this type of agenda, instead focussing on wealthier, more ‘commercially viable’ farmers and bigger, politically well-connected companies.

Finally, for any form of large-scale public-private partnership to be effective, it requires effective governance to ensure a fair sharing of risks and benefits; and regulation to ensure that more powerful players do not use political and economic clout to capture a dominant position in the market.

These conditions of good governance do not exist, on the whole, in most African countries.

The asymmetries of power within these arrangements can be enormous. In the SAGCOT programme (a mega-PPP in Tanzania), four large seed and agrichemical companies involved in the initiative have combined annual revenues of nearly US$100 billion. That is more than triple the size of the Tanzanian economy.

This raises serious concerns that these companies could lobby for policies that are in their interest and squeeze out small- and medium size enterprise from burgeoning domestic markets.

What are the alternatives?

Is there an alternative to the mega-PPP vision of agricultural development? I think so:

Public sector investment in research and development, extension services and targeted subsidies for credit can spread the benefits of agricultural investment widely and encourage private sector participation in the sector. Currently, governments in Sub-Saharan Africa only spend 5 per cent of their total annual budget on the sector, which is unforgivably low.

Securing land rights for local communities. This will help to ensure that communities within the target area for these schemes are not dispossessed in the name of investment. Secure land tenure also encourages smallholders to invest for themselves in land and productive activities.

Finally, alternative business models such as the development of producer organisations and the clever use of subsidies to encourage local processing facilities can develop agricultural markets without the need for ‘hub’ plantation farms or growth corridors. These models should be explored in more depth as part of a more inclusive PPP agenda.

With some US$6 billion of donor aid committed to further the aims of the New Alliance and $1.5 billion earmarked for growth corridor initiatives, mega-PPPs lead to a fundamental question. Would this money be better spent on lower risk models of agricultural development that give a greater share of the benefits to the poor?