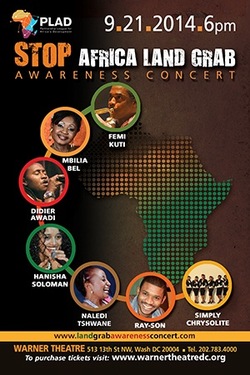 Sunday, September 21st at the Warner Theatre in Washington, DC

Washington, DC — Performing for the first time ever in DC – The legendary Mbilia Bel from the Democratic Republic of Congo, artist producer Didier Awadi from Senegal, emerging artist Hanisha Solomon from Ethiopia, Ray-Son from the Democratic Republic of Congo, the incredible Simply Chrysolite and Naledi Ya Tshawane who both hail from South Africa! PLUS a Special Appearance by the international star Femi Kuti from Nigeria. For more details, visit www.landgrabawarenessconcert.com. Tickets are available at The Warner Theatre’s web site (www.warnertheatredc.com) and through www.ticketmaster.com.

The Partnership League for Africa’s Development (PLAD) Presents the STOP Africa Land Grab Concert to bring awareness to the on-going massive land acquisition in Africa by foreign investors. Land grabbing has been defined by Oxfam as the contentious issue of large-scale land acquisitions; the buying or leasing of large pieces of land in developing countries, by domestic and transnational companies, governments, and individuals. While these large-scale land deals are supposedly being struck to grow food, often the land is used to grow profitable crops – like sugar cane, palm oil, and soy – often for export instead. Would this create a serious food security problem for Africans? Many believe so.

These African music stars have traveled from Africa to Washington, DC to participate in the concert pro bono in support of raising awareness of what now appears to be a “a new scramble” for Africa’s natural resources. They will also participate in the consultative group discussion. Proceeds from the concert will be used for a public awareness campaign in Africa that will encourage the inclusion of the local population in the decision-making processes regarding the management of land for sustainable development in Africa.

Femi Kuti – was born in London to Nigerian parents Fela and Remi Kuti. Femi honed his chops in his father’s band and then went on his own in the late 1980′s. Like his father, Femi has shown a strong commitment to social and political causes throughout his career. On his album “Fight to Win”, Femi collaborated with a number of U.S. musicians, including Common, Mos Def, and Jaguar Wright. Femi has been nominated for a Grammy award four times in the world music category in 2003, 2010, 2012 and 2013.

Mr. Awadi, spokesperson for the PLAD Land Grab Awareness Campaign, and who will perform one of his famous songs “I have a dream” said: “I am proud to take this opportunity to follow the path of Dr. Martin Luther King in this symbolic city of Washington DC to claim Africans’ dream to stop unfair land acquisition on the continent. I am happy to be part of this journey initiated by Binta”.

Hanisha Solomon – Ethiopian singer Hanisha Solomon is THE new name in Ethiopian music. A brilliant and powerful singer, her epic songs “Ayyoo” (Mother), “Amma” and “Africa Unite” announced the arrival of a new singing star. Singing in Amharic and Oromiffa languages she combines their musical scales with urban grooves from Africa and America to create music that is powerful and beautiful.

Mbilia Bel – is a Congolese rumba singer, known as the Queen of Congolese rumba and often referred to as the African Tigress. When Mbilia Bel makes an appearance, the crowds go into a frenzy. She is a talented stage performer and often tantalizes crowds with her exceptional dancing ability. Her more recent work has evolved to taking her usual style (traditional rumba and soukous) and mixing in rap and other modern elements

Naledi Ya Tshwane – is a superbly talented South African music vocalist, an authentic composer and an amazing performer. She plays with an 8 piece band comprised of a variety of traditional and modern instruments. The band produces a unique Afro Jazz sound with a repertoire that includes her own composed music as well as cover versions from Mama Letta, the late Mama Busi Mhlongo and the late Mama Miriam Makeba, Margaret Mcingane, Johnny Clegg and Toto.

Partnership League for Africa’s Development (PLAD) is a grassroots organization of African descendents and friends of Africa worldwide. PLAD’s main objective for this event is to raise awareness about the issues of land grab and contribute to a paradigm shift in Africa’s infrastructure development approach. PLAD will endeavor to secure the support of the African Diaspora, artists, institutions, friends of Africa and governments in order to keep everyone focused on the relevance of this issue. The second PLAD event focusing on massive land acquisition in Africa will be an invitation-only Consultative Group Meeting held on Monday, September 22nd with African representatives, Diaspora and friends of Africa to discuss a document prepared by the Oakland Institute on best practices in land acquisition.

The Founder, Executive Director of PLAD and Producer of the Concert, Mrs. Binta Terrier stated: “I am pleased to provide this platform in Washington DC for the African Diaspora and friends of Africa to unite, and express their position on the escalating problem of land acquisition in Africa which will inhibit sustainable peace and economic development on the continent. This premiere concert is dedicated to highlighting the looming acute food security problem for Africans. Seeing all these good people: African leaders, their representatives, Africans in the Diaspora, and great artists believe in our cause and generously accept to work with PLAD pro-bono to bring focus on this bitter reality – happening in our time. I believe that this concert will leave the audience inspired. We all must be reminded to live with passion and responsibility.”

NOTE TO MEDIA: Interviews and photo opportunities are available with PLAD’s Founder, Executive Director of PLAD and Producer of the Concert Mrs. Binta Terrier or any of the Artists.