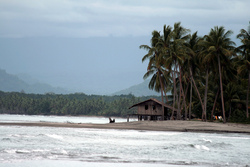 The local landowners argued that palm oil development would exact a heavy price on their community, making the case that the deforestation of pristine rainforests to prepare land for plantations would erode traditional biodiversity and livelihoods while releasing vast quantities of carbon dioxide emissions.

Community members applauded the decision and urged the courts to go further. “We are urging the government to take a firm and decisive decision … by cancelling all the illegal leases,” Lester Seri, a spokesperson for the community told PNGexposed Blog. “Court cases are expensive and beyond the means of most village people.”

Under the Land Act of 1996, these SABLs can only be issued if an “instrument of lease in an approved form” or an “acquisition by agreement” is signed. This means that the state must have a valid lease agreement with leaders of customary land and the prior informed consent of the affected landowners. The acquired land can then simultaneously be released by title deed to an “agreed” person – usually a foreign company – for a maximum of 99 years.

However the SABL system has recently come under fire. A Commission of Inquiry was set up in 2011 after complaints from environmental and human rights NGOs over “land grabbing” on customary lands.

“The Commission of Inquiry found widespread abuse, fraud, lack of coordination between agencies of government, failure and incompetence of government officials to ensure compliance, accountability and transparency within the SABL process from application stage to registration, processing, approval and granting of the SABL,” wrote John Numapo, the Chief Commissioner, in the final report.

The Commission reported that the Department of Lands and Physical Planning (DLPP) and National Forest Authority (NFA) had not conducted proper auditing and compliance on the SABLs. Some agreements were alleged to have forged landowner consent signatures, others were “missing” documents and yet others involved bribery.

“Those charged with the responsibilities to oversee and guide the implementation of SABL have not done their job properly. It also appears that landowner companies, developers and people with vested interests have high-jacked the SABL process to suit their own needs,” the Commission of Inquiry added.

While the Commission of Inquiry was conducting its investigation, the government imposed a national moratorium on issuing SABLs. Despite this, the DLPP issued two new SABLs to KLK in October 2012 after they acquired leases from other companies namely Batu Kawan and Collingwood Bay Plantations.

This was despite the fact that nine paramount tribal chiefs of Collingwood Bay – who represent 7,000 people from 326 clans in 22 villages – had issued a Joint Communiqué in 2010 stating outright opposition to logging and palm oil development in the region. “We the chiefs supported by our people unanimously express our opposition to any large scale development that would have an adverse effect on our people, their way of life and their environment,” they wrote.

“We will determine on our terms how we wish to pursue development and investment opportunities on our traditional land using our natural resources on the land and our maritime boundaries in the best way we see fit.”

“Our culture is intrinsically entwined and our livelihoods are entirely dependent on the primary forests and pristine marine environment that surrounds us,” Adelbert Gangai, a representative of the Collingwood Bay people and a forest and land rights campaigner, told Rainforest Action Network. “KLK will destroy the subsistence lifestyle we have maintained since time immemorial by attempting to illegally develop over 100,000 acres of our customary lands against our will.”

The customary landowners also filed an April 2013 complaint against KLK for violating principles drawn up by the multistakeholder Roundtable on Sustainable Palm Oil. (RSPO). The complaint was supported by the Rainforest Action Network (RAN) in San Francisco, who launched a series of global protests against KLK.

In a written response submitted to the RSPO, KLK claimed that the local chiefs “do not oppose oil palm or any development per se; the objection is to the indiscriminate destruction of their environment and livelihood. In fact, they welcome KLK’s pledge to provide sustainable development in a form which preserves their way of life and upgrading their standard of living.”

In mid May, after the PNG courts ruled against KLK, local landowners issued a celebratory press release. “The people of Collingwood Bay have spoken clearly through the voices of our chiefs that we are against large scale palm oil development on our lands,” Lester Seri, a landowner in Collingwood Bay wrote. “The chiefs of our nine tribes have spoken. Tens of thousands of our international allies have spoken. The Roundtable on Sustainable Palm Oil (RSPO) has spoken. And now the National Court of PNG has agreed: these permits are illegitimate. KLK must leave Collingwood Bay immediately and not return.”

This is not the first time KLK has been criticized for illegal land grabs and violations of human rights. Another complaint filed with the RSPO accuses KLK and Equatorial Palm Oil for grabbing customary land in Grand Bassa County, Liberia. And plantations operated by KLK in Indonesia have also come under fire for violating child labor laws, according to an April 2013 report by RAN titled: "Conflict Palm Oil in Practice: Exposing KLK's Role in Rainforest Destruction, Land Grabbing and Child Labor."