A coup for corpate capital 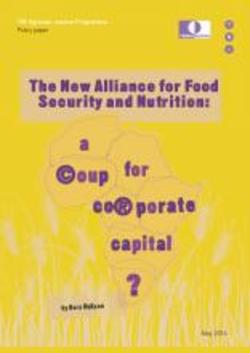 A Coup for Corpate Capital

Global corporations are increasingly influencing development policy, resulting in partnership agreements like the New Alliance for Food and Nutrition Security that grow corporate profits while endangering the livelihoods of small-scale farmers.

The New Alliance for Food Security and Nutrition (pdf, 967KB)

This report explores the ways in which global corporations are influencing development agendas in Africa, and the faulty rhetoric that underpins their vision of development. Small farmers produce 80% of the food consumed in Africa today, and farmers’ own investments make up 90% of all investment in agriculture globally. Yet, when it comes to the design of large-scale aid and development programs, corporate capital is increasingly in the drivers seat, shaping policies that support international investors while endangering and impoverishing small-scale farmers.

The New Alliance for Food Security and Nutrition, a new “co-operation framework” launched at the 2012 G8 Summit in the US and boosted at the 2013 Summit in the UK exemplifies this trend. The partnership now covers 10 African countries and brings well over 100 companies to the table as donors, in addition to the G8 governments and the European Union. The stated aim of this initiative is “to accelerate responsible investment in African agriculture and lift 50 million people out of poverty by 2022”. Partnership agreements with individual countries promise “refinements” to policy “to improve investment opportunities”. In practice these changes punish small farmers and reward corporations by privatizing the collective resources on which rural peoples’ livelihoods depend and revising seed laws to promote corporations’ products and limit farmers’ rights to use their own seeds.

This report investigates in depth the process which has given rise to the New Alliance for Food Security and Nutrition and reveals the complex ways in which global corporations have influenced this process as private corporations and through philanthrocapitalist foundations, corporate private sector forums, and bilateral and multilateral aid programmes. It explores the ways in which corporations have used forums to lend the appearance of impartiality and legitimacy to their recommendations, and reveals the lack of truly democratic consultation about the New Alliance with national stakeholders and, especially, with the small farmers who make up the majority of the population in the African countries involved.

This push towards corporate-led development has been underpinned by a set of problematic and widely disputed assumptions. Corporate actors have promoted a vision of development that emphasizes “modernization,” implicitly viewing traditional agricultural practices as ‘backwards’ and viewing the maximization of production as a key goal of development. At the same time it has promoted value chain approaches, the development of ‘agricultural growth corridors,’ and increased public private partnerships, all of which have the capacity to further entrench social inequality by disproportionately benefiting rich investors while further marginalising small-scale farmers.

Thus, the New Alliance seems poised to endanger the livelihoods of African small-scale producers while increasing the profits of major international corporations. However, activists and civil society organisations are resisting at all levels, developing and advocating for viable alternatives. This paper ends by documenting the counter movements underway within Africa and internationally through bodies like the reformed global Committee on World Food Security, suggesting that another way forward is possible. Nora McKeon, author of the report says: “The Alliance that could really vanquish hunger would be one between African governments and their own small-scale producers. A combination of pressure from above – as in the reformed CFS – and political pressure from below – from organized and articulate citizens – may well be the best way to get there.”

At global level, the reform of the Committee on World Food Security (CFS) in 2009, in reaction to the food crisis, has set in place the first ever world-wide forum for food issues in which all stakeholders are in the room and participate on an equal footing with governments108 109. With a mandate to defend the right to food of the world’s population and the voice it guarantees for organizations directly representing those sectors most affected by food insecurity, the CFS constitutes a focal point for developing the kind of alternative narrative that African smallholders advocate.

The CFS document, The Global Strategic Framework for Food Security and Nutrition, of which a first version was endorsed in 2012, is conceived as a primary global reference for coordination, coherence and accountability in decision making on food, nutrition and agricultural issues. The guidelines on tenure of land and other natural resources, adopted by the CFS in May 2012 and constituting the first ever global framework in this delicate area, is an important normative reference. Principles ensuring that investment in agriculture promotes food security, the right to food and smallholder livelihoods, which are currently being negotiated in the CFS, will be another key reference. The challenge is to bring these instruments to bear at continental, regional and country level. It is a big challenge, but not an insurmountable one. AU leaders have let themselves be won over by the New Alliance, but they have also adopted a framework and guidelines on land policy that defend communities’ rights to the land on which their livelihoods depend. NEPAD has launched an African Rural Development Forum aimed at enhancing poverty reduction, employment possibilities, vibrant rural economies and environmental sustainability, objectives in which corporate capital has no interest. With persistence and acumen Africa’s smallholder platforms are seeking dialogue with their national authorities, and mobilizing when they don’t get it.

What does all of this imply for foreign aid in general and the New Alliance in particular? Olivier De Schutter, who is just stepping down after six years of strenuously defending the right to food in his role as UN Special Rapporteur, notes that “the smallholder-led, country-led approach, is the type of aid that has the greatest multiplier effects for the poorest, and presents the lowest risks of dependency... It remains to be seen whether private firms, in partnership with public donors, will be willing to support approaches that look more like this, and less like the rest of their investment portfolios". If this seems unlikely on a voluntary basis we need to look for a more constraining approach. We opened this discussion by recounting the experience of a con-man who was allowed to ply his trade undisturbed for years while the forces of order went after his victims. Better targeted and rigorously enforced regulatory action is what is needed to curb corporate behavior. As African peasant leader Mamadou Cissokho puts it: “We don’t want ‘responsible investors’. We want a legislative framework that protects us effectively and investors who are obliged to respect the law”. A combination of normative pressure from above – as in the reformed CFS – and political pressure from below – from organized and articulate citizens – may well be the best way to get there.