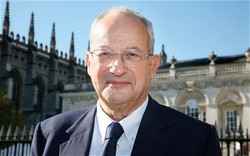 According to a report by Kenyan newspaper Business Daily, Lord Sainsbury’s new investment company, called Msingi (which is derived from a Swahili word meaning ‘Foundation’), will invest in East African startups that have high growth potential.

Msingi will support the establishment of new companies in key sectors like Agriculture and will undertake market and technology research as well assist entrepreneurs and new business owners in business planning and development. The new company will also operate an enterprise incubator which will provide venture capital to select businesses.

“With the setting up of Msingi, we are confirming our commitment to achieve sustainable industrial development through a number of ambitious sector development programmes,” David Sainsbury reportedly said during a meeting with Kenya’s Industrialization secretary, Adan Mohamed on Wednesday in Nairobi.

Msingi will be managed by the Gatsby Charitable Foundation, a British-based grantmaking trust that David Sainsbury founded in 1967 to provide funding for charitable causes in the areas of public policy, the arts and poverty alleviation in Africa among other things.

David Sainsbury, who inherited a stake in Sainsbury’s – one of the U.K’s largest supermarket chains, has a net worth that Forbes estimates at $1.3 billion. He has been investing actively in Africa for close to three decades through the Gatsby Foundation, which champions a series of development initiatives on the continent, including agricultural research and dissemination, microfinance for small businesses and strengthening government policy making and implementation. In 2005, the Gatsby foundation launched the African Agricultural Capital Fund (AACF), an agriculture-focused private equity fund that has invested in more than 10 East African companies involved in floriculture, rice farming, honey exports and agro-processing. AACF’s capital is managed by Pearl Capital Partners, a specialized African agricultural investment fund manager based in Kampala, Uganda,

“We have worked in Africa since 1985, with the overall objective of creating jobs and improving incomes. With the setting up of Msingi, we are confirming our commitment to [achieving] sustainable industrial development through a number of ambitious sector development programmes,” Sainsbury told the newspaper.