Benjamin Dummai, the Director-General of Senhuile SA, an Italian-Senegalese agribusiness project illegitimately occupying 20,000 hectares in northern Senegal, was fired by his board of directors and arrested by Senegalese authorities last week. Local media has reported that he has been accused of embezzling almost half a million dollars. 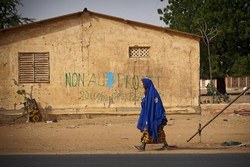 "No to the project: 20,000 ha – it's too much!": grafitti in Fanaye, one of the villages initially affected by the Senethanol/Senhuile project.

Local communities and civil society groups fighting for the ouster of this highly controversial project reacted immediately to the news. "Dummai's arrest and dismissal confirm our concerns about the murky international conglomerate behind Senhuile. We want this project shut down immediately," said Ardo Sow of the Collective of 37 villages of the Ndiaël region affected by the project.

International groups supporting the communities recently published a spate of reports pointing to the dubious past of Benjamin Dummai, who had previously been convicted of tax evasion and fraud in Brazil and was managing a secretive shell company behind the project in New York. "Why didn't APIX, the Senegalese investment promotion agency, do their due diligence on Dummai before they granted him a permit? And why did they give us such a hard time when we raised questions?" asked Renée Vellvé of GRAIN, one of the groups that looked into the corporate structure behind the deal.

Just two weeks before Dummai's spectacular arrest, Senhuile's board revoked his credentials and replaced him with the finance manager from the Italian headquarters of Tampieri Financial Group, who controls the majority 51% stake in Senhuile. "The arrest of Senhuile's key manager vindicates civil society claims and opposition to the project. It is time for Tampieri to publicly explain what's really going on and why the company insists on pursuing such a project," said Giulia Franchi of Re:Common, an Italian association campaigning to get Tampieri to pull out of the project.

Meanwhile, "the project is in the throes of growing troubles. From the dismissal of the CEO to the reduction of staff and activities in the project area in Ndiaël, the Senhuile project is unraveling. But the real scandal is that Senhuile/Senethanol still threatens the livelihoods and rights of 9,000 women and men in the North of the country, though more than 52,500 people from around the world have written personally to Tampieri demanding the closure of this project," said Frédéric Mousseau of the Oakland Institute, which issued a scathing review of the project in January.