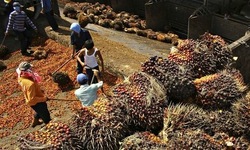 Palm fruits being unloaded at an oil processing plant in Indonesia (Photo: Reuters)

There is a street market selling Caribbean trinkets to cruise-liner passengers, a harbour full of super-yachts, a small park with chickens running around and several banks with long queues inside them.

But apart from a few middle-aged white men in expensive suits walking purposefully around Road Town, and nameplates showing that the world's biggest accountancy firms have offices here, there's barely anything in this small Caribbean capital to suggest that the British Virgin Islands is the world centre of offshore financial secrecy, corporate ownership, trust funds, paper companies and complex structures designed to avoid and possibly evade national financial regulation.

According to the BVI's government, Road Town is home to about 13,500 people, one million corporations and half the world's offshore companies. The tiny British tax haven has plenty of poor people, but the offshore companies based there held more than $615bn in assets in 2010, according to the International Monetary Fund, and last year attracted more than $92bn of direct investment – more than went to India and Brazil combined. A single building in the capital is reputed to be home to more than 90,000 companies.

But there are no names on the few brass plaques to be seen, no public lists of owners or directors available in the government's Financial Services Commission building on the Road Town Pasea Estate, no financial reports or addresses beyond anonymous PO box numbers. Around 100 firms in Road Town will set up, administer and keep secret an anonymous company for around $1,500 – few questions asked.

So it was no great surprise last year, when it emerged in Indonesian supreme court documents that the giant palm oil branch of the Royal Golden Eagle International conglomerate of forestry, rubber and palm plantation companies, owned by the billionaire tycoon Sukanto Tanoto, was using a web of shell companies based in Road Town and other tax havens to enable its palm oil companies to evade tax.

But what astonished corporate-watchers was how its subsidiary, the agribusiness giant Asian Agri, was operating. According to evidencecontained in the 8,000 court papers, the group, which employs 25,000 people across 14 subsidiaries and owns 165,000 hectares of plantations, was engaged in routine and systematic fraudulent accounting practices.

Using European and US banks, as well as the auditing services of international accounting firms and paper companies based at Portcullis TrustNet Chambers, PO Box 3444 Road Town, they and their fictitious subsidiaries sold vast quantities of palm oil to other fictitious affiliates in Hong Kong, Macao and in the BVI at an artificially low price. In a process known as transfer pricing, the commodities were then sold on at a higher price to real buyers, thus avoiding higher taxes in Indonesia.

In another transaction highlighted in the case, 2,500 tonnes of palm oil was sold to a fictitious Hong Kong company, then to a fictitious BVI company and eventually on to a genuine Malaysian company, banking a profit for Asian Agri of $154,500.

Court documents also provide evidence of mass production of fake invoices as well as fake hedging contracts. The Indonesian supreme court estimated that Asian Agri Group (AAG) evaded $112m of tax over a few years and ruled that the company must pay $205m in fines as well as the taxes owed.

But Indonesia's anti-corruption officials are so short of resources that, until the AAG case, no major company had been successfully prosecuted for corporate tax evasion and it took a whistleblower to provide the key papers to prove wrongdoing.

In scenes reminiscent of a Hollywood thriller, Vincentius Amin Sutanto, AAG's financial controller, was accused of embezzling $3.1m of company funds, but escaped to Singapore on a fake passport, taking with him documents which, he claimed, could prove illegal activities at the company. He was later convicted of embezzlement and sentenced to 11 years in prison in Indonesia.

The Asian Agri case, which continues to reverberate in Indonesia, has had repercussions across the world. The British government, which is implicated because of the involvement of British overseas territories, recently met Indonesian investigators and others and signed a memorandum of cooperation. It says it wants to push tax evasion and money laundering up the agenda of the G8. The European parliament has cited the case in arguments that timber imports from Indonesia must be shown to be free of tax evasion and money laundering.

But the case also raises questions about whether AAG's tax evasion is a one-off or whether other south-east Asian forestry and palm conglomerates are also using British territories. Indonesia's forests, the second biggest swath in the world after the Amazon, have been a wild west in the past 30 years, according to the World Bank and others. A few companies have together deforested tens of millions of square kilometres of virgin forest and built up a reputation for illegal felling, human rights abuses and ruthless land-grabbing.

According to a 2011 Interpol report written in conjunction with the World Bank, the Indonesian government "could be losing $2bn a year in unpaid taxes and charges … due to the activities of just 18 illegal logging syndicates".

Data seen by the Observer suggests an investigation of the sector is needed. "Large-scale palm oil and paper and pulp companies active in Indonesia have shell companies in the BVI, making this jurisdiction one of the preferred choices of Indonesian forest conglomerates. Two other UK-linked jurisdictions, Bermuda and the Cayman Islands, are also used by forest conglomerates," says one document.

"Due to a lack of transparency of these shell companies, it is difficult to document reasons for the use of these companies, including whether they are being used to reduce income and/or withholding taxes legitimately or otherwise," it says.

"For some privately held companies, data is not available. For other companies, an examination of … the analysis of effective tax rates and/or return on sales showed patterns over a longer period which are difficult to understand and raise questions which merit further research and investigation," says another document.

Back in the British Virgin Islands, fraud investigators say they are swamped by financial crime. "It is overwhelming how big the cases are getting," said Martin Kenney, a Canadian tax lawyer, speaking in his Road Town office. "There's more money in the world, and more structures mean more secrecy. The evidence suggests the frequency and the size of the frauds [taking place] is changing dramatically."

In 22 years of working for governments and corporations, Kenney says he has traced around $3bn, including money stolen by the former Nigerian president Sani Abacha. "We look down the value train and see where the money has been taken [into] a labyrinth of legal structures, all designed to make our work unbearably complex and tricky," he said.

The financial intelligence units of the UK and Indonesian governments met recently at Chatham House in London to explore ways to work together. "There is growing awareness of the scale of the problem, as well as some successful prosecutions – most notably, the recent case of Asian Agri," said Alison Hoare, a Chatham House researcher.

"One problem has been a lack of understanding that the forestry sector is a high-risk sector for financial crime. The application of risk assessment by the regulatory authorities has not been sufficiently rigorous."