Final offensive against resistance to ProSavana 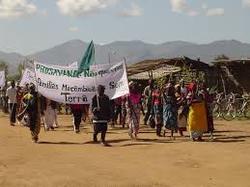 Covered up in a seminary of Divulgation of Results of Agrarian investigation in the Nacala Corridor, where CSO, famer organizations, companies, Academic institutions and institutions of research will participate, this meeting in Nampula represent the last phase of consults regarding to Prosavana, in an act that mean to manipulate and seek to legitimate the program through the population of Nacala Corridor, CSO and Social Movements that oppose this imperialist and colonialist program for more than two (2) years.

The Academic Action for the Development of Rural Communities – ADECRU, an important Mozambican association of students and young people, mostly from countryside, recognized for its work in the fight for democratic engagement and productive insertion of several communities stakeholders in the prioritization, implementation and assessment of socio-political, economical and cultural of Rural communities’ agenda, has been following, attentively and denounce the new configuration and matching of interest and onset colonies among stakeholders involved in Prosavana whose circus takes us back to the conference of Berlin (1884 – 1885), with the division and effective share of Nacala Corridor and not only, between Japan and Brazil.

In the present offensive, the Brazilian government plays through Brazilian Cooperation Agency (ABC), EMBRAPA, Lula Institute, Getúlio Vargas Foundation (FGV), Social and Economical Development National Bank (BNDES), Brazilian corporation of agribusiness and the respective embassy in Mozambique as instrumental agents of imperialist penetration. To the Japanese side, there are JICA, Japanese corporations of agribusiness including the embassy of Japan in Mozambique.

This imperialist alliance between Brazil and Japan, the first, among vague roles, takes the one intended to control:

i) The production of tools vector of Prosavana (Master Plan and Nacala Fund), including the transformation of structures of the Ministry of Agriculture into promoter agents of agribusiness (IIAM, National Directorate of Agrarian Extension, National Directorate of Land and Forest) to the resemble image of the Ministry of Agriculture of Brazil that support Brazilian agribusiness.

ii) The Commoditization of Nacala Corridor and creation of Land Bank (Banco Terra) which will progressively give land to the Brazilian agribusiness corporations and Japanese’s one for production of soya, maize and cotton in the first phase, holding a possession of 300.000 hectares up to 2015, according to the confidential information that ADECRU had access to, contradict the pronouncement of the President of Republic and Minister of Agriculture in which they say communities will not lose their land by the implementation of Prosavana;

iii) The Implementation of Nacala Fund whose Conception and coordination is under leadership of FGV, with the mission of mobilizing 2 billion USD, in which 500 million allocated for the first phase.

Japan is responsible for:

i) Expenditure of financial, material and human resources for the development of logistics of Corridor of Nacala (ports, roads, railways) to export soya, maize, cotton production to Japan, in order to face the Niponic demand for animal protein and fiber.

ii) While Brazilian companies take control of productive component, including the fertilizer market, seeds and machinery, so the Japanese corporations are intended to take over the logistic market and the commercialization.

The configuration of imperialist interest and colonialist in our country has been facing a strong and powerful resistance from communities of Nacala Corridor, SCO and Social Movements, environmental and religious organizations.

The seminary hosted in Nampula makes part of a broad bulk of actions being developed by the Coordination Team of Prosavana with the intention of bringing to nothing the resistance of communities of Nacala Corridor, CSO and Social Movements. The strategy is performed through:  (i) intimidation and cohabitation of communities leaders, CSO, leaders of Social Movements including activists; (ii) obligation of CSO, Social Movements and leaders of different communities of Nacala Corridor to sign letters of supposed consults that  later on are used in the national and international stages as evidences of Prosavana; (iii) a broad propaganda in the communities of Nacala Corridor translated into material and financial benefits resulted from Prosavana; (iv) attempt of cooptation of academics and national, international institutions of research in order to oppose censures and sovereign demands  presented by the people of Brazil, Mozambique and Japan; (v) infiltration of stranger agents in the CSO and Social Movements in order to swerve the resistance against Prosavana and extinction of the strategy of the fight.

Formal information and trustworthy facts in ADECRU’s possession shows that the Master Plan was concluded and given to the Government of Mozambique and approved by guardianship institution, the Ministry of Agriculture. The Academic Action for the Development of Rural Communities – ADECRU, denounces and strongly rejects:

1) The dangerous and imperial agenda  of governments of Brazil, Japan and Mozambique, in connivance with the corruptive and oligarchic structures of Mozambican government

2) The proposal of Brazilian government regarding Nacala Fund of using royalties from coal exploited by Vale to secure loans made by agribusiness corporations at  Nacala Fund.

3) The involvement of FAO in Prosavana and Nacala Fund, a United Nations organism whose mandate is designed to starve and contribute to the achievement of food security. However, FAO mean to facilitate the production of monocultures for exportation, a clear violation of spirit of celebration of 2014 as an International year of Familiar Agriculture, a violation of an Agreement signed with La Via Campesina for the development of peasant agriculture, as well as a hard transgression of original spirit of Letter and Voluntaries Paths for a Responsible Governance of Land Ownership, fishing and Forest.

So, ADECRU claims that the government of Mozambique should:

1) Starts a broad democratic discussion, frank and inclusive with communities of Nacala Corridor in a way of replying their sovereign demands;

2) The president of the Republic of Mozambique, Armando Guebuza, through his competence and attributions should answer the Open Letter indented to Stop and Reflect the Prosavana Program, addressed to him in May 2013 with all contained and defended demands;

3) The minister of Agriculture should convoke urgently CSO, religions organizations, social movements, parliamentary, academic institutions and institutions of research, and other interested stakeholders for a public presentation and deep discussion of Master Plan and priorities for the development of agriculture in the Corridor of Nacala.

4) The government of Mozambique should investigate all denounces of intimidation and all attempts of criminalization of leaders, famers organizations activists, religius organization, environmental, and communities imputed to some elements of Prosavana coordination team.

5) The Minister of agriculture in representation of Prosavana coordination team should suspend every attempts of cooptation of academic and all national and international institutions of research to oppose censures and sovereign demands presented by the people of Mozambique, Brazil and Japan

ADECRU convokes all movements of peasants, environmental and social, rural communities and philanthropy people for a broad mobilization, organization towards constructions of a national popular movement intended to fight in defence of their rights and interest related to the access and control of land, water, goods and cultural patrimonies and common historic. Also, calls for a vigorous and firm resistance of all affected by ProSavana.

ADECRU assume from this moment a commitment to use all national and international indispensable legal means to break down the implementation of ProSavana. We reaffirm our unconditional engagement  for the imperious priority of hardening the fight in defence of land and natural resources while patrimonies of people, for the genuine agrarian reform and for guarantee and protection of communities, population and peoples’ rights.