“We will not cede our land to the Italians’ tractors” 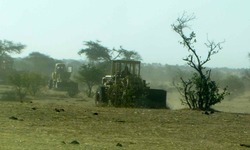 “We will not cede our land to the Italians’ tractors”

"We will fight until the end. They will not kick us out of here." The village men raise their arms in defiance. And they turn their eyes a few hundred meters away, towards the plantations of these strangers who one fine day came onto their land with tractors and machines, cleared everything and turned their lives upside down. "It was the month of August 2012. We saw them arrive out of nowhere. At first, we were told they would have gone further away. Instead, they occupied our pastures," says Bayal Sow, head of the rural community of Thiamène. "We were duped. But now they can be sure: they will have to step over our bodies to go ahead with the project."

The "project" is a 20,000 hectare agribusiness investment by the Italian-Senegalese company Senhuile. It aims to produce sunflower seeds for export to Italy, as well as peanuts and maize. When it was started in 2010, in an area not far away, it sparked controversy and violent uprisings that resulted in two deaths. The project was then suspended by President Abdoulaye Wade. But soon afterwards it was relocated to Ndiael, a natural reserve which had been restricted for biodversity conservation and livestock grazing and was now reclassified. "Many in the area were shocked by the fact that the government granted this land to foreigners. On several occasions, some small farmers had requested plots to cultivate and they were refused because the area was protected," says Amadou Ka, from the nearby village of Kaddu Ndef. "Senhuile obtained the reclassification within a day, thanks to its connections within the government. Today, it acts like a boss in the area."

Confirming his words, the whole area around the plantation is under surveillance. The 37 villages which oppose the project are surrounded by a kind of “cordon sanitaire”. During a first visit to the area, to meet the communities, we were followed by a vehicle the whole time and then stopped by the police, who held us in custody for three hours and finally instructed us to leave the area. In order to be able to speak to the communities, it was necessary to go back in the dark of night, in secret.

But what is Senhuile? Whose interests are behind it? An Italian-Senegalese joint venture, Senhuile is 51% owned by the Tampieri Group from Faenza, and 49% owned by a Senegalese company called Senethanol. This latter group looks shady. Created in 2010, it is 75% owned by Agro Bioethanol International (ABE), a limited liability company registered at a suite on Madison Avenue in New York by a Panamanian citizen who has served as a front man for dozens of shell companies around the world. The names of the members of ABE are not known, because US law protects their anonymity. The only known person is the manager, Benjamin Dummai, an Israeli businessman who has had trouble with the law in Brazil, where he lived for several years. Convicted for fraud and tax evasion in the South American country, Dummai later moved to Italy, his wife’s country of origin. Today he lives in Dakar, where he serves as the chief executive officer of Senethanol and managing director of Senhuile. Despite several attempts to talk with him, he declined to answer to our questions.

The same applies to high officials in the Senegalese government, who did not want to comment on this story. Even at the Agency for the Promotion of Foreign Investments (APIX), lips are sealed. After explaining that every company in Senegal is protected by anonymity, an APIX officer added that, "The case of Senhuile is very controversial."

But what does Senhuile produce? Originally set up as a biofuels project, it changed direction to focus on sunflower seeds. With this orientation, it caught the interest of Tampieri, who was looking for sources of supply of raw material for its vegetable oil production facility in Faenza. Today, on the ground, it's not clear what the project does. There is an area producing sunflowers, but it seems to be abandoned. Contacted by phone, the company’s manager Carlo Tampieri confirmed that sunflower production was suspended but said he was confident that activities would soon resume and that, in the medium term, they would see a return on the investment.

This shadiness on the ground and the complex corporate structure raise more than one doubt. Why was it necessary to create a company in the United States through a Panamanian trustee? Why does a project to produce agrofuels change production targets on several occasions? Why does a group like Tampieri decide to invest in Senegal in partnership with people from such an obscure background? These are questions that raise concern within Senegalese civil society, too, where doubts are mounting that the agribusiness operation was set up with less noble objectives. "There are suspicions in Senegal of possible connections between the project and money laundering," said Baba Ngom, Secretary-General of the National Council for Rural Concertation and Consultation (CNCR). Whatever it may be, herders from Ndiael continue to watch the threatening advance of “the Italians' tractors” and reaffirm that they will not move from their land for anything in the world.