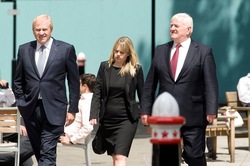 Robert McKendrick (left) of Capital Alternatives arrives at the high court in London. Capital Alternatives marketed a scheme for African Land Ltd that promised to develop rice farms in Sierra Leone. It took a 50% cut from the money paid by each new recruit. (Photo: Gavin Fog)

The Financial Conduct Authority is delighted with the ruling that an investment scheme which has already taken £8million from the public should be regulated.

To judge by its reaction, you’d think that an investment scheme that’s taken more than £8million from the public and that I’ve twice written about had just won a huge legal victory.

African Land Limited sold itself on the back of a promise that its rice farms in Sierra Leone could turn “a tidy profit of 15% a year”.

The watchdog Financial Conduct Authority claimed that this was the sort of investment scheme that should be regulated and, because it was not, it was operating unlawfully.

The result was a battle in the High Court and Judge Nicholas Strauss has just published his 111-page findings.

“The FCA’s case against African Land was, in effect, presented as a fraud case,” says the company on its website.

“The underlying implication and tone of the FCA’s case was that the scheme was a sham.

“The African Land scheme has now been found to be a legitimate business”.

The court heard that more f­armland has been sold to investors than is owned by the company, prompting the judge to remark: “This is not a comfortable situation.”

He went on: “Purchasers of some 4,300 acres have so far received no return and most of them still have no land allocated to them.”

Another alarming figure was that Capital Alternatives, which marketed the scheme for African Land, took a 50% cut from the money paid by each new recruit.

That means that the half that was left to invest would have to double in value for investors to merely recover their costs, yet alone make a profit.

When it came to the central legal issue the judge could not have been more clear.

African Land is, and always has been, the sort of scheme that should be regulated and “cannot lawfully be carried on”.

Tracey McDermott, the FCA’s director of enforcement and financial crime, was delighted.

“This ruling shows that even if operators have deliberately tried to structure their scheme to avoid ­regulation, the court will still look at whether those operating the scheme should in fact be regulated for consumer ­protection,” she said.

A second investment scheme formed part of the same case.

Reforestation Projects Limited promised “significant returns” from planting trees in Australia for ­investors who stumped up £9,000.

No one was in court to defend Reforestation Projects, also called Capital Carbon Credits, which raised almost £9million from the public.

As I revealed last March, a former director was Mark Ayres, of Basingstoke, Hants, whose history includes a 13-year jail term for conspiracy to murder.

African Land and Reforestation Projects both used a third outfit, Capital Alternatives Limited, to market their schemes to potential investors.

The FCA claimed that “a leading role” at Capital Alternatives was played by banned director 45-year-old Renwick Haddow.

Neither of them gave evidence.

Investors will have to wait until after the appeal to find out if what they’ll recover from the frozen assets of the companies.