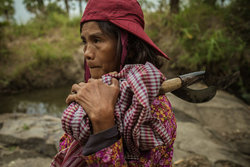 T. N. (61) walks back home after a day working in the plantations. She was evicted from her 7 hectares land in 2011, and was forced to accepted a compensation of 300USD (the estimate value of 1 hectare is around 5.000 USD). Now she and her family, don’t own any land and they’re not self-sufficient anymore (2.5 of the 7 hectares were rice fields) and they had to ask the bank for loans. Omlaing commune, Kompong Speu Province, Cambodia. 08 Jan. 2013 (Photo: Thomas Cristofoletti / Ruom)

The director of a CPP senator’s sugar plantation accused of stealing land from hundreds of families said Wednesday that most locals were happy with the new jobs the plantation has generated, a week after a visiting European Union parliamentarian renewed calls for an investigation of rights abuses by companies ex­porting to Europe.

Seng Nhak, the managing director of Senator Ly Yong Phat’s Phnom Penh Sugar plantation in Kompong Speu province, defended the company’s work after a visit to the area by E.U. Parliament member Patrice Tirolien. Before leaving Cambodia on Friday, Mr. Tirolien said he would press the European Commission to investigate the E.U.’s free-trade scheme for developing countries over long-running allegations that Cam­bodian sugar plantations are taking advantage of the deal are violating the rights of hundreds of local families.

“Many villagers are satisfied that there are jobs and a community where none existed before,” he said. “But there are some who say they have issues and as a company we will be seeking to learn more about those issues so that we can address them properly.”

Mr. Nhak said he welcomed an “objective look” at the company’s work. But rather than an E.U. investigation, which local rights groups and the E.U. Parliament have called for, he preferred to keep any probe in the plantation’s hands.

“In the company’s view, this is the most logical step,” he said.

Phnom Penh Sugar, and another plantation adjacent to it registered to Mr. Yong Phat’s wife, Kim Heang, are accused of encroaching on the farms, grazing land and community forests of more than 1,500 families across 15 villages since 2010. While some of them have received $25 to $500 in compensation, rights groups say 200 families had yet to receive anything as of last month.