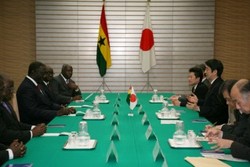 Ghana government pledges its "absolute support" for Marubeni's sugar plantation project in Northern Ghana, saying it will facilitate the acquisition of land.

Mr Haruna Iddrisu, Minister of Trade and Industry, on Thursday reiterated government’s commitment to increase the nation’s electricity generation capacity from the current 2,800 megawatts to 5,000 megawatts by the end of 2016.

He said there are as many as 500 rural communities across the county in the Western, Central, Upper East, Upper West, Northern, Brong-Ahafo and the Volta Regions that are still desirous of getting connected to the national electricity grid.

Mr Iddrisu made these disclosures during a meeting with a Japanese trade delegation which included Marubeni Corporation, and assured  Ghana’s industrial players that the government will continue to ensure adequate and sustainable supply of utilities, particularly water and electricity.

“We would be happy to work with you to extend electricity in order to give meaning to President Mahama’s declaration of energy for all by the year 2016,” he said.

He also explained that it is the expectation of President John Dramani Mahama that more rural communities in Ghana are connected to the national electricity grid.

He pointed out that Ghana remains an oasis of peace, stable social and political order, and has put in place legal and regulatory regimes to protect any investments.

Mr Iddrisu assured Marubeni Corporation of the security of its investments, and appealed to the corporation to assist in building an energy plant to be dedicated to industries in the Tema area and Western Region since they have interest in the energy and power sector.

“I am aware of Marubeni’s interest in development of sugar plantation in Northern Ghana in Depale and Kukubla in the Northern Region of Ghana,” he said.

He pledged President Mahama’s absolute support for the initiative to establish  sugar plantation and sugar factory in Northern Ghana.

He said government will play its role in facilitating the acquisition of land together with Marubeni in developing accessible road to the site.

Mr. Naoto Nikai, Japanese Ambassador in Ghana, who led the delegation, said Marubeni Corporation is one of the largest Trade and Investment Companies in Japan which operates all over the world in energy and other areas.

He added that Marubeni Corporation’s powerful delegation to Ghana shows their strong interest in expanding their business relations in Ghana.

The Japanese Ambassador was optimistic that there would be  fruitful results in expanding the economic business relationship between his country and Ghana.

Mr Yamazoe pledged the corporation’s desire to organise and promote various projects according to the needs of the country, adding that they would create employment and develop the various industries.