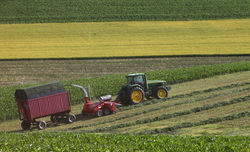 Foreign ownership of Wisconsin agricultural land more than doubled from 2006 to 2010 before increasing another 91 percent in 2011. (Photo: John Hart)

A new review sought by Assembly Republicans of a law that limits foreign ownership of state land was criticized Thursday by an Assembly Democrat who called it an “end-around” attempt to change it.

The 126-year-old law bars foreign companies and individuals from owning more than 640 acres in the state. Gov. Scott Walker tried to change the law through a provision in last year’s budget, but it was pulled amid opposition from state farmers and bipartisan criticism from legislators.

The vote was by paper ballot, and the result wasn’t announced Thursday. Attempts to reach Vos, the committee chairman, after the vote, and Rep. Lee Nerison, R-Westby, chairman of the Assembly’s Agriculture Committee, were unsuccessful.

Committee member Rep. Andy Jorgensen, D-Milton, said he voted against seeking the opinion but expected that the majority of the committee, which has five Republicans and three Democrats, would vote to approve it. He also said he expected Van Hollen, a Republican, to write an opinion that says the GATS treaty does override the state law.

“That’s why what just happened is so important,” he said.

Jorgensen maintains that Republicans want the law changed so the trend of foreign companies buying state land, mostly for agriculture, will continue.

Foreign ownership of Wisconsin agricultural land, most of it farms and timberland, more than doubled from 2006 to 2010, and increased an additional 91 percent in 2011, according to the most recent statistics from the federal Farm Service Agency. The percentage of ag land in the state owned by foreigners jumped from 0.5 percent to 0.9 percent in 2011.

“There’s an end-around going on for the sale of farmland to foreign ownership to triple in this state,” Jorgensen said.

Last year, Walker said he put the provision in his budget as a technical fix that would finally determine if state law provided an exception for countries that signed the GATS treaty.

That question has been unanswered since each state was asked to list potential laws on its books that would conflict with the treaty. The states were told those laws would be protected.

Wisconsin did not list its law as conflicting with the treaty, but since its law is similar to laws that were listed, it was unclear whether it should be protected.

Jorgensen said he believed Walker’s provision was pulled from the budget because state residents believed the law should be protected.

“That was democracy in action,” he said. “Now we get it in a different form, only a few of us get to vote on it, and it gets to a point where the attorney general can make the law unenforceable.”