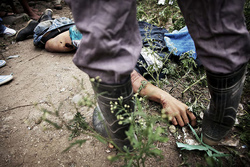 ► For background information and updates on this action, please visit http://oxf.am/wYZ

The investigation is one of the most damning ever issued by the internal watchdog and concludes that the Bank’s private sector lending arm, the International Finance Corporation:

The CAO found that these failures arose, in part, from staff incentives “to overlook, fail to articulate, or even conceal potential environmental, social and conflict risk”2, and that staff felt pressured to “get money out the door”3 and discouraged from “making waves”4.

The CAO investigation reveals one of the most egregious investments in the IFC’s history. Such findings should rightly provoke shockwaves at the institution, and an admission of fault, a commitment to root and branch investigation and reform, and apology and remedy to affected communities who have suffered at the hands of IFC’s client.

However, despite the CAO’s evidence of serious and sustained failures in IFC’s handling of the case, the IFC’s official response is superficial and its proposed actions totally inadequate. In the face of CAO-compiled evidence which points to systemic problems and could indicate malpractice on its part, the IFC not only refuses to address these systemic issues, but compounds them with further attempts to cover up its wrongdoings. In its response, the IFC rejects some of the CAO’s findings, without specifying which ones or providing evidence to support this rejection. IFC also states that the Action Plan is contingent on Dinant’s agreement.5 Of grave concern is that the IFC continues to deny that human rights abuses may have been committed by its client in the Aguán Valley, and to deny that the root cause of these abuses is a long standing conflict over land.

CSOs are now calling for:

A full list of NGO demands can be seen at the end of this document.

5 The IFC response states, “In addition, we will seek Dinant’s agreement to undertake that the following actions are undertaken in the next 12 months…” p. 4.