Tanzania: State has not grabbed land from anybody 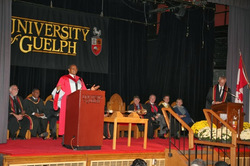 President Jakaya Kikwete refutes claims that his government is a notorious grabber of land from poor subsistence farmers in rural areas in an address at Guelph University, Canada.

Tanzania: State has not grabbed land from anybody

President Jakaya Kikwete has refuted claims that the government is a notorious grabber of land from poor subsistence farmers in rural areas.

The president was addressing Guelph University community in Canada when he shot down the allegations. Indeed, this claim is unheard of on the home front.

The government has always recognized the significant role played by farmers. In fact it is these farmers who produce more than 90 per cent of the food consumed in this country.

They also contribute 25 per cent of the Gross Domestic Product and help the nation earn foreign exchange by 34 per cent. How then could state operatives usurp land from such farmers?

It is imperative, however, to mention here that it is on record that greedy officials often collude with corrupt elements in government at district, ward and village levels to grab farmers' land and pass it to investors. This has often stirred land conflicts.

The government has already moved to stem this rot. It has announced that from now on, foreign investors who intend to invest in agricultural ventures will be allocated a maximum of 10,000 hectares. A similar directive applies to local investors.

The idea is to check haphazard allocation farmland that often leaves large tracts unattended for years. The move will also curtail what land grabbers call "land banking." This decision has been arrived at after an exhaustive research.

Land bankers are greedy investors who purchase huge chunks of land, often corruptly, and leave them unattended for years so they can re-sell them for a higher price. The 10,000 hectares will be parceled out mainly to investors in sugarcane plantations.

And the minimum 5,000 hectares will go to rice growers. Well and good, so long as the move reduces the now rampant conflicts over village land. Conflicts over land are so numerous. Some pit investors against villagers, some of who opt for an arrow fight.

Other disagreements pit farmers against livestock keepers. It is high time such conflicts were tamed. Some farmers in this country get a raw deal when their tracts of farmland are passed to so-called investors with little or no compensation at all.

Greedy officials in districts, wards and villages must be stopped in their track as they are the source and cause of land conflicts in the country.