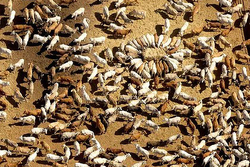 INDONESIA'S announcement yesterday that it plans to buy a million hectares of Australian agricultural land to raise beef cattle is the clearest signal yet that it wants to lower its dependence on the current live export system.

Conversely, it is also a tacit admission that Indonesia's goal of self-sufficiency in beef is unachievable if it relies solely on its own resources.

The Republic's State Enterprises Minister, Dahlan Iskan, has been quoted in local media saying that Australian land would be bought specifically to raise calves to be shipped to Indonesian feedlots.

“We hope this measure will go some way to resolving the issue of beef availability in Indonesia,” he told business publication kontan.co.id.

Much remains unknown about the proposal, including whether the Foreign Investment Review Board will approve it, and the response of the new Coalition government, some of whose members are hostile to foreign investment in agricultural land.

It is also unclear whether Indonesia plans to buy northern rangeland, or make a bigger diversified investment in more productive land.

A million hectares of northern rangelands represents one moderately large station. As such, this would only go a small way to giving Indonesia sovereignty over live cattle shipments out of Australia.