The global land rush: Markets, rights, and the politics of food 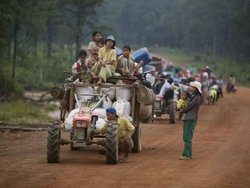 Farmers travelling in a convoy in rural Cambodia (Photo: Reuters)

The global land rush: Markets, rights, and the politics of food

Abstract:
In the past five years, interest in purchasing and leasing agricultural land in developing countries has skyrocketed. This trend, which was facilitated by the 2008 food crisis, is led by state and private investors, both domestic and foreign. Investors are responding to a variety of global forces: Some are securing their own food supply, while others are capitalizing on land as an increasingly promising source of financial returns. Proponents argue that these investments can support economic development in host states while boosting global food production. But critics charge that these "land grabs" disregard land users’ rights and further marginalize already vulnerable groups: small-scale farmers, pastoralists, and indigenous peoples who are being displaced from their land and from resources essential to their survival. Amid mounting global protests, two dominant frameworks have emerged to assess and contest the global rush for agricultural land. This Article critically examines both approaches.

Part I provides an overview of the drivers and impacts of large-scale land transfers and the problematic land transactions involved. Part II sets out the contours of what I term the market-plus approach and the rights-based approach — the frameworks assumed respectively by proponents and opponents of these deals. Part III analyzes key conceptual differences in each framework’s approach to rights and risks and to land distribution. I argue that the market-plus approach tolerates and facilitates rights violations, whereas the rights-based approach sets a normative baseline that repudiates these impacts and addresses key distributive concerns. Part III assesses the potential of each approach to effectively regulate land deals in practice. I find that both approaches emphasize procedural safeguards to protect land users’ rights and argue that these safeguards are ineffective at contesting the power dynamics at play in land transactions. Part IV proposes concrete reforms to help empower communities most affected by land deals and argues that international actors must be more involved in securing rights protections.