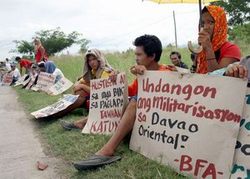 The peasant group issued the call on the first day of their camp-out dubbed “Kampuhan ng mga Magsasaka ng Hacienda sa Ilalim ng Hacienderong Pangulo” that will last until Monday June 10, the 25th year of what the KMP described as the “sham Comprehensive Agrarian Reform Program” of the government. Farmers from Hacienda Luisita, Hacienda Looc and Hacienda Roxas in Batangas, Hacienda Yulo in Laguna, the vast haciendas in Bondoc Peninsula, and Hacienda Araneta in Bulacan and Rizal provinces will join the camp out.

“Pangilinan’s newest venture is a black eye to the sham CARP. Another strong testament to the CARP’s anti-peasant and pro-landlord character,” Flores said.

“Where in Davao Oriental will the Aquino government and Pangilinan get the 30,000 hectares? For sure, they will get this from the lands already occupied by farmers and evict them from their lands,” the peasant leader added.

He said that “while Davao Oriental farmers continue to suffer landlessness due to the control of foreign corporations over vast tracts of lands in Southern Mindanao, they also suffer extreme hunger and poverty that was exacerbated by the devastation brought by typhoon Pablo.”

“It is the height of irony that while Davao Oriental farmers are yet to recover from the wrath of typhoon Pablo, the Aquino government is engaging in the massive sell-out of vast tracts of lands to big businesses,” says Flores.

Pangilinan said the conglomerate is more interested in palm oil production because palm trees are more resilient to typhoons. He said that despite the attractiveness of the banana industry in the country, he is concerned about the impact of weather changes on banana plants.

The KMP reiterated calls for the junking of the CARP and the implementation of a “genuine agrarian reform and the free distribution of lands to landless tillers in the country.”

“In the 25 years of CARP, the Filipino peasantry remains landless and continue to suffer feudal and semi-feudal exploitation at the hands of big landlords,” the KMP leader said.

“Only a genuine agrarian reform program that will break the monopoly and control of big landlords over vast tracts of lands and haciendas and its subsequent free distribution to landless tillers will solve the centuries-old landlessness of peasants in the country,” he said. #