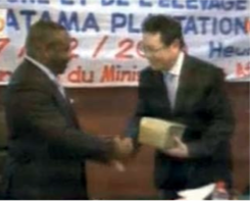 The company will build nine plants to produce 920,000 metric tons of two different kinds of palm oil annually, said Leong King Ming, ATAMA president. Production is due to start in 2017, he said.

To contact the reporter on this story: Robert Mbakouo in Brazzaville Via Nairobi at [email protected]