The Saudi-Sudanese Investment Forum - Is it a rehearsal for other Arab investments? 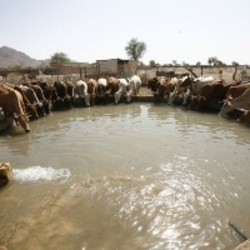 The Saudi-Sudanese Investment Forum - Is it a rehearsal for other Arab investments?

Khartoum - Arab economy experts expect the Saudi-Sudanese Investment Forum of April 13-14 to come up with positive results that would contribute to resolving all problems that have accumulated and hindered implementation of the plans and strategies for addressing the Arab food question which turned into sheer topics of discussion in regional and international gatherings, particularly the Arab summits.

The soaring world food prices have become a source of anxiety to the concerned international institutions. In order to confront this question as a focal issue, the Arab countries began to lay down practical and appropriate plans and policies the most important of which were investment plans that provide an effective mechanism to pave the way for finding quick solutions for achieving an Arab food security.

In order to present those plans and projects and to conclude investment deals that will help make food available to the Arabs, the concerned authorities in the Sudan completed arrangements required for the success of the investment Forum so as to enable the Sudan to attract surplus Arab funds, especially those with the Saudi sovereign funds for investment in various fields, particularly as the Sudan is among the Arab countries that are counted on for achieving the Arab food security in view of its vast fertile lands and plentiful water of various sources and varied climate that suits various kinds of crops. Moreover, Sudan possesses an immense varied animal wealth that relies of natural pastures in addition to the forestry. The country also occupies a geographic location that makes of it a crossing point to the Arab markets.

In a move to remove all obstacles facing investment in the Sudan, especially that of Saudi Arabia, President Omar Al-Beshir has made orders for removal of those impediments and facilitation of the procedures to Saudi Arabian investor as a way for further integration of the two countries. He called for proper preparation and coordination with the private sector and the Sudanese Businessmen Union for the success of the Forum .

For his part, Investment Minister Mustafa Osman Ismail described the new 2013 Investment Act as fair and satisfying the wishes of all investors. The challenge at present is to transform this act as an executive mechanism, bearing in mind that it has made good the defects of the previous act by establishing a single channel for the procedures, resolving the land property question and removing conflict between the center and the states.

Dr. Ismail regarded the Forum as an important task by the national investment body that he said would contribute to pushing the Sudanese-Saudi relations forward. He reassured the Saudi investors that all problems they may face would be resolved through the Act. The Minister appeared optimistic that the Forum would be of a positive turnout to both sides. He indicated that there are about 200 projects which are ready, free of hindrances and viable for implementation. He said those projects would be presented at the Forum , calling for reactivation of the investment protocols, agreements and treaties between the countries during future Forums.

The investment obstacles Dr. Ismail previously admitted include bureaucracy, conflicting laws, taxes and fees, port procedures, land leases and the citizen-investor relationship. He said there was a high committee that will tackle those problems with the Saudi side.

As regards the opportunities of investment in the country’s states, Minister of State for Investment Al-Sadek Mohamed Ali said a recent meeting of the projects committee with the governors and representatives of the states provided an opportunity for promotion of the ready projects in the states. He described the Saudi-Sudanese Forum as an important economic gathering that might lead other Arab investor into the Sudan.

For his part, the Chairman of the Sudanese Businessmen Union, Saud Al-Birair, said the Forum would offer an opportunity for the various Saudi business sectors to acquaint themselves with the opportunities and fields of investment in the Sudan. He said the Sudan would be represented by a big delegation at the Forum in which Birair said numerous feasibility studies on different investment projects would be presented to the participant businessmen and investors as a way for boosting the economic exchange between the two countries. He revealed that a holding Sudanese-Saudi Arabian company would be formed.

The Chairman of the Sudanese Businessmen Union expressed the hope that Saudi Arabia would be a major economic partner to the Sudan, calling for removing all obstacles of the Saudi investment in the Sudan. He said the Sudanese-Saudi Business Council is embarked on implementation of a working plan for enhancement of the economic ties between the two countries. The Forum would offer a powerful push to the bilateral relations between the Sudan and Saudi Arabia, particularly in the fields of agriculture, industry and mining, Birair said, adding that emphasis would be placed on those fields. He indicated an agreement for formation of joint companies in the fields of agriculture and meats. The Forum will discuss an initiative by HM, the Custodian of the Two Holy Mosques, King Abdullah, on food security and the way for benefitting from the Arab investment funds to secure the funds necessary for financing the productive investment projects, Birair said.

Bahri indicated the need for resolving all problems facing the investors and providing them with further facilities and incentive for attracting the capitals. In order to realize food security in the Kingdom and avoid future food crises and maintain the stability of the prices constantly, the Government of Saudi Arabia has taken a number of resolutions and measures for tackling the food security issue through HM, the Custodian of the Two Holy Mosques, King Abdullah’s initiative of a Saudi agricultural investment abroad he made at the third Arab economic and social development summit that was recently held in the Saudi capital Riyadh. He said the initiative was commended by officials of the economic sector as denoting humanitarian signals aimed at upgrading the international productivity, with emphasis on the essential food commodities.
Sheikh Salih Abdullah Kamil, the head of the Saudi side in the Sudanese-Saudi Arabian Business Council, praised the Government of Sudan for emphasizing on development and investment. He expressed the hope that the Forum would be a new start for the economic cooperation between the Sudan and Saudi Arabia as well as a motivation for joint investments, particularly on the projects of food security in response to the initiative by the Custodian of the Two Holy Mosques for achieving food security through agricultural investment abroad.

Kamil underlined the responsibility of the private sector in Saudi Arabia and Sudan for the success of the Forum . The two sides must demonstrate willingness for cooperation, the Saudi tycoon said, adding that all indications show that the Forum would achieve the required successes and accomplishments, particularly after issuance of the new Investment Encouragement Act and the sincerity and facilities it contained.

He said His Majesty’s initiative was aimed at security food for the Kingdom as well as the country of investment and in view of the natural resources it possesses and its vicinity to the Saudi markets in addition to the eternal ties linking it to the Kingdom, the Sudan is the most appropriate country for implementation of the food security projects.

To ensure the success of the initiative, the Kingdom put a number of conditions including he choice of a country that possesses good agricultural possibilities and attractive investment laws, provided that the private sector will be the main investor in addition to finding mechanisms to guarantee export of some of the crops to Saudi Arabia in fair prices. The concession contract should include provisions on achievement of goals of the investments and protection provided that the investments should of long terms and offered all the required resources for agriculture, including fertile lands, plentiful water and agricultural inputs.
HM King Abdullah bin Abdul Aziz, in order to bolster the role of the Arab private sector in the process of development, raised the capitals of the Funds by 50% to13.2 billion dollars by the end of 2011, while the capitals of the joint Arab companies reached 5 billion dollars.

With this initiative and in accordance with several economic reports, the increase in the capitals of the Arab funds, institutions and companies is expected to be not less than 10 billion US dollars for promotion of the Arab monetary funds and joint companies in development and in financing the Arab strategic projects such as those of the electricity and agriculture for achieving self-sufficiency as well as water and food security and other projects.

The Arab funds are non-profit making development institutions that include the Arab Monetary Fund, the Arab Fund for Economic and Social Development, the Arab Bank for Economic Development in Africa, AAAID and the Arab Authority for Investment and Export Guarantee.
The Arab financial organizations have agreed to raise the capital of the Arab funds by 50% to 100% during five years to confront the challenges being faced by the region. The participants in the 42sd annual meeting of the Arab financial organizations that was held in Dubai in the presence of the Finance ministers, governors of the central banks of countries in the region, the International Monetary Fund and the Islamic Bank for Development, approved the increase of the capital of each of the Arab Monetary Fund, the Arab Investment Institution, the Export Guarantee, AAAID and the Arab Fund for Economic and Social Development.

The participants in the meetings estimated that the total increase of the capitals of the funds at around 10 billion dollars based on resolutions of the Economic Summit that was held in Riyadh, Saudi Arabia early this year aimed at confronting the challenges posed by the international economic blocks and the regional political crises. The Ministers indicated that the meeting is aimed at drawing a road-map for creating an investment climate conducive to the region’s future prospects of establishing joint regional projects to confront the challenges for widening the job markets, backing the investment activities and raising the trade exchange.

The Chairman of the Board of Directors of the Arab Monetary Fund, Jassim al-Mannai, pointed out that the economies of the Western countries could no longer continue offering development assistance as was the case in the past. Moreover, he said, the international financial institutions are hesitant in offering grants to the countries of the region due to the political instability in some of them. The ministers discussed an initiative proposed by the United Arab Emirates (UAE) urging for reforms for economic stability, development of the financial sector, stability of the food situation, development of exports and financing trade. Officials disclosed an increase in capital of the Arab Fund for Economic and Social Development by 100% from 7 billion to 14 billion dollars for raising its investment in electricity and roads projects. They also raised the capital of the Arab Monetary Fund by 100%.