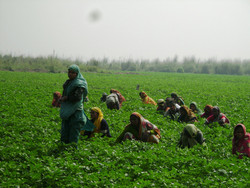 WASHINGTON, Apr 8 2013 (IPS) - The World Bank will be placing stronger emphasis on issues of land tenure and socially and environmentally sustainable agricultural investing, it announced Monday.

The bank, one of the world’s largest development lenders, also formally reiterated its concern over the large-scale corporate “land grabbing” that has affected vast swathes of Africa in recent years.

Following on decades in which agricultural sectors were almost completely bypassed by international investors – including bilateral donors and multilateral lenders such as the World Bank – recent years have seen a surge of interest across all types of investors and development institutions.

On Monday, Kim noted that the World Bank, too, had stepped up its agriculture-related investments, but warned that “additional efforts must be made to build capacity and safeguards related to land rights – and to empower civil society to hold governments accountable.”

Ahead of a four-day annual World Bank conference on land and poverty here this week, the institution stated that it expected the global population to grow by two billion by 2050, requiring an expansion of global agricultural production of 70 percent.

While the institution is reiterating longstanding calls for significant new public and private investment in both small-scale and large agricultural operations, it has warned that “investment alone will not be enough” to attain these levels.

Rather, citing spiking food and fuel prices coupled with the looming uncertainties of climate change, the bank is urging the adoption of stronger national and international standards on investments and land rights as a way of helping farmers across the globe raise yields.

“Usable land is in short supply, and there are too many instances of speculators and unscrupulous investors exploiting smallholder farmers, herders and others who lack the power to stand up for their rights,” the bank notes. “This is particularly true in countries with weak land governance systems.”

As such, the bank will now be strengthening efforts aimed at improving land governance, protecting the rights of landowners, and promoting policies “that recognise all forms of land tenure and help women achieve equal treatment in obtaining land rights”.

Particularly following the rise in both global food-price volatility and demand for biofuels over the past half-decade, agricultural land has become a lucrative commodity for international investors, who have focused particularly on Africa.

According to 2011 research by the bank, some 60 million hectares of land in developing countries were purchased or leased by private sector investors in 2009 alone, a process that has continued. In many cases, local civil society organisations have warned that these transactions are being carried out with government complicity and without following international standards on stakeholder inclusion.

“There’s been a tendency recently towards governments giving large plots of land to international investors for free or at concessional rates, thinking that doing so will fast-track development,” Nicholas Minot, a senior research fellow with the International Food Policy Research Institute, a Washington-based think tank, told IPS recently.

“To some degree there’s logic to that, but there is a huge question as to whether that land was owned by the government or whether it was previously occupied by small-scale farmers without titles. Establishing secure land rights for people in rural areas is a massive but critical issue.”

Organisers say that this week’s World Bank conference on land and poverty – the 14th – is the largest they’ve ever put on, and includes participation by government officials from several countries. Bank officials also say that the conference’s focus, titled “Moving towards transparent land governance”, is indicative of a new global discussion on the issue.

“This year we have dozens of sessions on issues of land governance, transparency and implementation of the Voluntary Guidelines, which wouldn’t have been as prominent four years ago,” Jorge Munoz, a land tenure adviser for the World Bank, told IPS.

“This is not a new subject for the bank, but it has become much more prominent globally – though clearly some countries are much more interested in increasing transparency for improving land governance than others.”

As part of the bank’s scaling-up on the issue, Munoz points to the institution’s rollout of a new tool with which governments are able to get a snapshot analysis of their current land tenure and related laws. Called the Land Governance Assessment Framework, Munoz says 33 countries have now started to use it.

In addition, the bank is now assisting in implementing new international guidance, approved in May under the auspices of the U.N. Food and Agricultural Organisation (FAO), called the Voluntary Guidelines for the Responsible Governance of Tenure of Land, Fisheries, and Forests in the Context of National Food Security.

According to USAID, the Untied States’ central foreign assistance agency, at least 22 countries have now requested technical assistance on implementing the Voluntary Guidelines. Although the project is still in a pilot phase, a “zero draft” of the guidelines is to be released within the coming month.

“Voluntary regulations don’t always work, of course, but in this case these guidelines may be the only way to solve the problem of ensuring that small-scale farmers don’t get abused and are able to access lands they may have used for generations,” Danielle Nierenberg, co-founder of Food Tank, a Washington think tank, told IPS.

“Without these guidelines, we’d be left with anarchy. Still, governments and consumers now need to take the initiative to push corporations to take this seriously.”

The bank is also involved with another FAO process to develop an international set of Principles for Responsible Agricultural Investment, aimed at offering global guidelines on socially and environmentally sustainable investments in agriculture.

In recent years, some civil society groups have questioned the bank’s own part in facilitating large-scale land acquisitions (including here and here), particularly that of its private sector arm, the International Finance Corporation (IFC). Yet Munoz says much of this criticism has overstated the institution’s role, which he suggests has focused less on financing than on offering technical assistance on reforms.

“There is a major global problem with land-grabbing,” says Munoz. “The bank’s role is, essentially, to be leaders in assisting countries in improving land governance and improving the behaviour of private investors.”