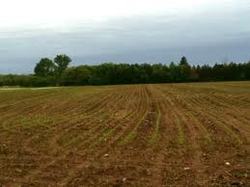 Gov. Scott Walker's budget proposes lifting a longtime prohibition on foreign ownership of large tracts of land in Wisconsin — a change that some legislators believe will allow other countries to gain too much control over some of the world's best farmland.

The current law, enacted in 1887 and upheld by the state Supreme Court in 1976, bars foreign individuals or corporations from owning more than 640 acres in the state.

Walker spokesman Cullen Werwie said the law in question had to be changed because it conflicts with the General Agreement on Trade in Services. GATS is a treaty among World Trade Organization members that was enacted in 1995 to stabilize international service trading.

But two Republicans are among legislators who oppose the proposed changes, saying the current law does a good job of protecting state economic interests.

Rep. Lee Nerison, R-Westby, chairman of the Assembly agriculture committee, said the proposal should be debated openly on its own merits rather than as part of the $68 billion state budget.

"To me, I think we need to leave it where it was," Nerison said. "That's something we need to sit down and talk about."

Sen. Dale Schultz, R-Richland Center, agreed, adding: "That law was originally put in place for ag purposes, but there's no question that this would allow the Chinese government to buy a big chunk of land in northwest Wisconsin if it wanted to,"

At the end of 2010, foreign investors had a tiny stake in Wisconsin, according to a report from the federal Farm Service Agency. Foreign-owned land in the state comprised just 118,211 acres, or just 0.5 percent of privately owned land in the state. But that total more than doubled over the previous five years, the report showed.

Sawyer County had the most foreign-owned land: 28,741 acres by a single Danish owner — all of it forest, as is about 62 percent of the state's total. Lafayette County was second with 16,136 acres, more than 15,000 of it cropland, also with Danish owners. Just 641 acres in Dane County were owned by foreign investors.

Representatives of the state Farmers Union and the Cooperative Network said they hoped the provision would be removed from the budget and debated as a separate bill.

The Wisconsin Farm Bureau Federation hasn't decided yet whether to endorse the provision, according to its executive director of government relations, Paul Zimmerman. He also said the law change could allow foreign investors to purchase land for timber and mining sand used for hydraulic fracturing.

Schultz, a member of the Senate ag committee, said he had never heard suggestions that the laws were outdated or needed to be changed.

"For many of us in Wisconsin engaged in agriculture, we know the value of Wisconsin's farmland," he said. "It doesn't surprise me that sooner or later that foreign entities, whether they are governments or corporations, would notice that we have a great resource, particularly in this water-rich environment where we live, and want to invest in it."

Rep. Andy Jorgensen, D-Fort Atkinson, questioned Walker's including the provision in the budget: "He is going to have to explain this one. I have plenty of questions, not that I could ever be convinced that we need to sell that much land to China."

Bill Oemichen, president and CEO of Cooperative Network, said the existing state laws are weak because they aren't enforced. But still, he said, representatives of a cooperative network in New Zealand studied Wisconsin law because of the fear surging through the country since Chinese investors purchased five dairy farms there over the past year.

Sen. Kathleen Vinehout, D-Alma, worries about how a surge of foreign investments in state agriculture will hurt young farmers.

"The main problem is that these companies would be able to raise so much money that they could outbid or drive the market up for any Wisconsin farmer," she said. "Right now the biggest problem that young farmers have is getting over the initial capital investment to buy the land. We've seen a 10-fold increase in the value of land in the past 10 to 15 years. … It's not that easy to start out anymore."