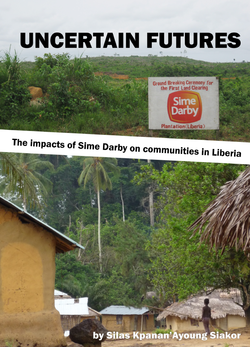 The Garwula District, in Grand Cape Mount County, is one of the areas affected by the 63-year lease agreement signed by the Malaysian giant oil palm producer Sime Darby with the Government of Liberia in 2009. When the company established large scale export-oriented oil palm plantations the livelihoods of the local residents were disrupted, and women have had to cope with many difficulties.

The report “Uncertain futures. The impacts of Sime Darby on communities” (1) produced by the Sustainable Development Institute (SDI) and World Rainforest Movement (WRM) and also quoted in another article of this bulletin, gives a deeper insight in how industrial oil palm plantations affect women in a differentiated way.

Based on field work, the report depicts how women in the Garwula District used to feed their families growing on the same piece of land, rice, corn and cassava together with a variety of vegetables such as potatoes, cucumbers and many more. They could thus secure their food because while the rice was growing, the family could harvest other crops with a shorter growing time, such as corn, cucumbers and other vegetables.

Women worked side-by-sidewith their husbands and other family members, and the surplus was sold to the local markets or to the capital Monrovia. So, not only did this strategy secure food for the family but also provided a small income that allowed them to hold on until the major harvests.

The report says that “(T)he months of December through March are mostly sunny and dry in Liberia. At this timeof the year, there is a relative abundance of food in most villages. But more than that, this is also a moment of strategic value to the women – the ideal time for processing cassava into Garie for sale and domestic consumption. Garie is a cereal-type cassava product that is eaten widely throughout Liberia. It is very easy to prepare and can be prepared in many different ways. Women in the area set up small businesses processing and marketing the Garie. They are known for producing high quality Garie and local consumers favor their products. This was a major income earner mainly for women”.

Not only farming but also the forest had been particularly important for women as with the forest products they gathered they could make a variety of household items like fishing nets and baskets, of utmost importance in villages that rely on fishing as a major source of protein. The sale of the surplus fish can also provide a small income for the family.

But Sime Derby came and took away the farms and the forest along with the food sovereignty and even the sacred sites in the forest in order to plant oil palm. Women’s source of income, which empowered them and gave them pride, was lost.

“In this our country, we the women we help our husbands. If you get the children andthey are going to school the husbands will not be able to take care of all the needsof the family. But if the women are doing business we can be helping our husbands. When your husband makes the farm and you plant cassava, you make gari, you can go to Monrovia and sell it. You can be doing that and helping to support the family.You can buy your own clothes and pay some of the children school fees. Now that thecompany has destroyed all of that they need to provide money for the women to engagein business.”

When in November 2012, under the slogan ´Our Future is Now´ more than 150 people from communities inside oil palm concession areas in Liberia gathered to discuss the expansion of export-oriented oil palm plantations in their country and the impacts of this expansion on their livelihoods (see WRM Bulletin Nº 185), information could be exchanged between communities from Cape Mount County already affected by the Sime Darby oil palm plantations, and communities from other three counties in the concession area who are still not affected.

Women impacted by Sime Derby could speak out and warn about the expansion of industrial oil palm plantations.

Interviewed by WRM, Ethel Wion, the President of the Farmers Union Network of Liberia expressed:

“I think the concession agreement is in violation of the Constitution’s rights of our citizens, especially for the women that their occupation is farming, that live on the land, fish in the rivers, get meat from the forests.

As 90% of our people live on farming, the quantity of land requested for is too much and the tenure is too long so I think that the concession agreement will affect us greatly.

As Liberian we have a food security program, they say that they want to reduce poverty. But how can we reduce poverty if that land that we are supposed to use to produce food and make us food secure will be taken away? So how do we reconcile food security with the quantity of land that is being given to the concession company?

Some of the women are frustrated because in the past all of them lived on farming, but now they find that they are not getting anything of the farming. There is no road to the market, there is no market for what they produce and so they are living on subsistence farming just to eat. In some cases you find that they are saying ‘let the land go! What are we getting out of it?’

So, as a representative of the farming committee I think that we have to see how they can empower our women to grow food, to provide them with the market, to make them accessible to loans and grants, so that they can be able to speak up for themselves because if you are hungry you make mistakes.

It’s hour to secure our future for tomorrow. We need our land because without our land we will not be able to grow food, without food there will be no peace, without peace we will go well back to the 50 years of civil war. Our children will be used, beat up and abused, there will be a lot of robbery in the towns, the girls will be turned into prostitution. If we cannot develop the mass of the people the nation won’t be developed. So the farming committee says NO. is not in our interest because we as farmers live on the land.”