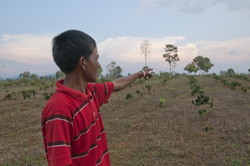 Over 2,600 land lease and concession agreements were granted covering a total amount of 1.1 million hectares of the national area, roughly five per cent of the land of Lao PDR.

Centre for Development and Environment | 23 January 2013

The most comprehensive publication to date on land concessions and leases in Lao PDR has been presented to the public. In a symposium Vice Minister Dr. Akhom Tounalom of the Ministry of Natural Resources and Environment (MoNRE), German Ambassador Mr Robert von Rimscha and SDC Director for the Mekong Region Ms. Ruth Huber applauded the study as key to a better understanding of actual land uses in Laos and the contributions and demands of investors.

The publication shows that over 2,600 land lease and concession agreements were granted covering a total amount of 1.1 million hectares of the national area, roughly five per cent of the land of Lao PDR. Today, one out of five villages in the country is affected by these investments. They exceed the area used for wet rice production.

The land concession inventory is the result of a trilateral cooperation between the Lao government, Switzerland, and Germany. Representatives from the three partners jointly introduced the document published by MoNRE, the Center for Development and Environment (CDE), the Swiss Agency for Development and Cooperation (SDC), and the Deutsche Gesellschaft fuer Internationale Zusammenarbeit (GIZ).

“Land use and its regulation are the core development issue on the ground”, Ambassador von Rimscha stressed. “We support the government of Lao PDR in improving regulation and harmonizing policies to make sure that investment in land results in benefits for all stakeholders.”

Land investments in Lao PDR have grown substantially in the last decade. Such investments can contribute to infrastructure development, poverty alleviation, and economic productivity. Too intensive investments, however, have also generated a range of impacts that are under scrutiny by the Lao government together with its development partners. It becomes apparent, for example, that investments are made in rather accessible, but less in remote areas – a development that contradicts the Lao government’s objectives. As a considerable share of the crops is exported as raw product, there is significant room to improve the value added benefit in the country. A panel consisting of the vice-ministers from the Ministry of Natural Resources and Environment, Ministry of Planning and Investments and Ministry of Agriculture and Forestry discussed the broader questions on how cross- sectorial collaboration could still be enhanced to optimize the benefits from investments in land while minimizing its potential negative implications.

Previously, data has not always been collected systematically, and not all publicly available information has been used. “There was a considerable amount of data collected by governmental agencies, but it was rarely processed to produce information and knowledge in a suitable and easy accessible form for decision-makers and for the wider public”, SDC’s Regional Director said. The first national overview now provides a comprehensive source of analysis that will serve for a better understanding of the land concessions and leases development and its implications for Lao PDR and its population.