MELBOURNE – Should rich countries – or investors based there – be buying agricultural land in developing countries? That question is raised in Transnational Land Deals for Agriculture in the Global South, a report issued last year by the Land Matrix Partnership, a consortium of European research institutes and nongovernmental organizations. 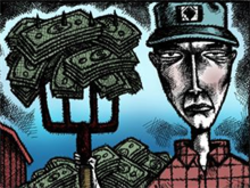 Most of these purchases have been made in Africa, with two-thirds taking place in countries where hunger is widespread and institutions for establishing formal land ownership are often weak. The purchases in Africa alone amount to an area of agricultural land the size of Kenya.

It has been claimed that foreign investors are purchasing land that has been left idle; thus, by bringing it into production, the purchases are increasing the availability of food overall. But the Land Matrix Partnership report found that this is not the case: roughly 45% of the purchases involved existing croplands, and almost a third of the purchased land was forested, indicating that its development may pose risks for biodiversity.

The investments are both private and public (for example, by state-owned entities) and come from three different groups of countries: emerging economies like China, India, Brazil, South Africa, Malaysia, and South Korea; oil-rich Gulf states; and wealthy developed economies like the United States and several European countries. On average, per capita income in the countries that are the source of these investments is four times higher than in the target countries.

Most of the investments are aimed at producing food or other crops for export from the countries in which the land is acquired, for the obvious reason that richer countries can pay more for the output. More than 40% of such projects aim to export food to the source country – suggesting that food security is a major reason for buying the land.

Oxfam International calls some of these deals “land grabs.” Its own report, Our Land, Our Lives,indicates that, since 2008, communities affected by World Bank projects have brought 21 formal complaints alleging violations of their land rights. Oxfam, drawing attention to large-scale land acquisitions that have entailed direct rights violations, has called on the Bank to freeze investments in land purchases until it can set standards ensuring that local communities are informed of them in advance, with the option of refusing them. Oxfam also wants the Bank to ensure that these land deals do not undermine either local or national food security.

In response, the World Bank agreed that there are instances of abuse in land acquisition, particularly in developing countries in which governance is weak, and said that it supported more transparent and inclusive participation. At the same time, it pointed to the need to increase food production to feed the extra two billion people expected to be alive in 2050, and suggested that more investment in agriculture in developing countries is required to improve productivity. The Bank rejected the idea of a moratorium on its own work with investors in agriculture, arguing that this would target precisely those who are most likely to do the right thing.

One may ask whether transparency and the requirement that local landholders consent to a sale is enough to protect people living in poverty. Supporters of free markets will argue that if local landowners wish to sell their land, that is their choice to make.

But, given the pressures of poverty and the lure of cash, what does it take for people to be able to make a genuinely free and informed choice about selling something as significant as a right to land? After all, we do not allow poor people to sell their kidneys to the highest bidder.

Why does the purchase of body parts give rise to international condemnation, while the purchase of agricultural land does not – even when it involves evicting local landholders and producing food for export to rich countries instead of for local consumption?

The World Bank may indeed be more concerned about local landholders’ rights than other foreign investors are. If so, the 21 complaints made against Bank projects are most likely the visible tip of a vast iceberg of violations of land rights by foreign investors in agricultural projects in developing countries – with the others remaining invisible because victims have no access to any complaint procedure.

One such case belatedly came to the attention of the United Nations Human Rights Committee. In November, the Committee concluded that Germany had failed to police the Neumann Kaffee Gruppe regarding its complicity in the forced eviction of several villages in Uganda to make way for a large coffee plantation.

But the evictions took place in 2001, and the villagers are still living in extreme poverty. They found no remedy, in either Uganda or Germany, for the violation of rights that, according to the Committee, they possess under the International Covenant on Civil and Political Rights, to which Germany is a signatory. Are we to believe that landholders fare better with Chinese or Saudi investors?