Mozambique: "Pro-Savana" will not deprive farmers of land 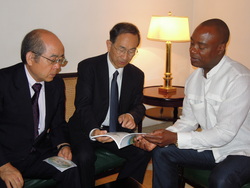 Jose Pacheco, the Minister of Agriculture of Mozambique, meeting with officials from the Japan International Cooperation Agency in Brazil to discuss the ProSavana Project.
AIM | 26 December 2012

Maputo — The Mozambican government has insisted that no farmer will lose land as a result of the “Pro-Savana” agricultural development programme in the north of the country.

Pro-Savana’s full title is “Triangular Cooperation Programme for the Agricultural Development of Tropical Savannahs in Mozambique”. The partners in the programme are Mozambique, Brazil and Japan, and the area of implementation is the Nacala Corridor, which covers much of Nampula province, and parts of Zambezia and Niassa.

Speaking on a joint programme of Radio Mozambique and Mozambican Televisions, Agriculture Minister Jose Pacheco, sought to calm those who distrust this project, particularly those who claim that it will deprive peasant farmers of arable land.

“In our country there is no place for the return of crown companies”, said Pacheco. “The small farmers will keep their land, and indeed the objective is to expand these areas”.

Pacheco’s reference was to the practice of the Portuguese colonial state, in the late 19th century, of granting charters to “crown companies”, consisting mostly of British capital, under which they were given 50 year leases on enormous tracts of Mozambican territory. These companies (of which the best known were the Mozambique Company and the Niassa Company) operated as states within a state. They could raise their own taxes and exploit their areas’ resources and labour as they liked , as long as they handed over 7.5 per cent of their profits to the Portuguese state.

Pacheco explained that the major purpose of Pro-Savana is to develop agricultural technologies to induce an increase in productivity among Mozambican farmers. “Hence the project envisages setting up a network of agricultural research laboratories in the Nacala Corridor, aimed mainly at small scale producers”

He pointed out that small peasant farmers are currently responsible for 90 per cent of Mozambican agricultural production, which mostly remains at subsistence level. “So to develop agriculture, we are betting heavily on the small farmers”. Pacheco said. “We want these small farmers to become commercial farmers on a small, medium and eventually even large scale”

Pacheco added that Pro-Savana is a replica of a development project that occurred 30 years ago in Brazil, in a region with characteristics similar to those of the Nacala Corridor. He insisted that implementation of the project will obey Mozambican legislation, particularly the Investment Law and the Land Law.

The whole strategy of negotiating private investments in the Nacala Corridor, said Pacheco, hinged on the social responsibility of the investors to promote small producers in the areas covered by the project.