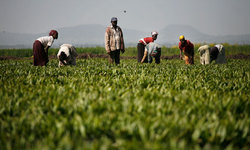 In recent years, Africa has seen an increase in corporate and foreign Governments leasing or purchasing large areas of land in some of its poorest regions. These large-scale land acquisitions have been described as ranging from foreign direct investment and development projects to land grabs and neo-colonialism. Concerns have been raised about the forceful removal of local populations, environmental damage and the effects on family farming, while others argue that the investments introduce advanced agricultural technologies, create jobs and increase export earnings. This paper examines the incidence of large-scale purchase of agricultural land in Africa by Indian investors. Beginning with a brief review of current trends, an analysis of India’s incentives for outsourcing farming to Africa, as well as the consequences of these land deals, follows. The aim of this paper is to shed some light on the important issues related to these large-scale land acquisitions.

Food insecurity and a boom in biofuels have been named as having contributed considerably to the perceived increase in the number of land acquisitions. This is especially so after the marked increase in food prices in 2007 and 2008, and the growing demand for biofuels.(2) The World Bank estimates that prior to 2008, global agricultural land expanded by less than 4 million hectares annually.(3) By the end of 2009, the number increased to approximately 56 million hectares, more than 70% of which were found in Madagascar, Ethiopia, Mozambique and Sudan.(4) However, it is interesting to note that not all these acquisitions have actually been implemented.(5) The International Food Policy Research Institute estimates, on the other hand, that the land deals have accounted for 15 to 20 million hectares annually between 2006 and 2009.(6) Nonetheless, the purchase of agricultural lands by foreign investors is a significant global phenomenon.

It should at this point be noted that the term ‘foreign investor’ refers to Governments as well as private investors. Similarly, the funds involved may be of state or private origin. Furthermore, Governments may also be shareholders in the investing companies. Consequently, it is difficult at this juncture to establish exactly which investors are state-owned or private-equity entities. Similarly, the parties in the host states may be of either Government or private origins.(7) A significant feature of this phenomenon that deserves attention is the new intra-regionalism reflected and a growing south-south investment, which is exemplified by the number of India-Africa land deals.(8)

India is one of Africa’s biggest investors in agricultural land. This interest is seen by both the Indian Government and its private sector. There are perceived to be two main factors for these acquisitions, namely food and energy security and investment profitability.

Food prices seemed to be in long-term decline due to the expansion of agricultural frontiers, trade and innovations, but in 2007 and 2008 food prices suddenly increased.(9) The global food market is characterised by constraints and uncertainties. Food supply is affected by environmental externalities that affect soil quality or water supply and climate change is frequently associated with land degradation, water scarcity and extreme weather conditions. In addition to that, food supply is influenced by the oil price as a result of its crucial role in transport and production of nitrogen fertilisers. Also a factor is the use of food stocks in the production of biofuels, which itself is in high demand, requiring land, fertilisers and crops that might otherwise be used as feedstock. This ultimately drives up the prices of agricultural produce. Also under consideration are demographic shifts and changing diets.(10)

India only has limited farmland resources, and therefore is very dependent on food imports. This combined with high food prices and a growing population has presented quite a challenge in terms of food supply.(11) The belief therefore is that the acquisition of agricultural land abroad might ensure long-term food security. Various states produce food in foreign states and then ship it home, thereby gaining more control over the food production process. This method results in less dependence on the global market and presents the possibility of being able to bypass potential volatility of food prices.(12)

Indian investors, just as those from all over the world, are increasingly beginning to see the potential in purchasing agricultural land abroad. The availability of cheap land, abundant water sources and reduced labour costs all appeal to Governments and private companies alike.(13) India has claimed that its land purchases are used primarily for its own food security, but the farmland investments present a good export opportunity for agricultural products. Rationale for this claim is the proximity of some African states in relation to other parts of the world which may reduce freight costs. In addition, there exists a domestic African market for agricultural products.(14)

More and more Indian investors are buying or leasing land in Africa. Perceived as a significant player in farmland acquisitions by the Land Matrix Database,(15) India is recorded as holding 4.5 million hectares of African land.(16) Approximately 3.2 million hectares worth of Africa’s land deals are found in East Africa, among which the majority concerns land in Madagascar and Ethiopia.(17) If one considers that African states welcome these investments because of the expected development opportunities and job creation, it is interesting to note that more than 80 Indian companies are involved in land deals in Ethiopia.(18) It is true that special incentives are put into place for investors, such as offers to lease large amounts of land at generous terms and duty free imports. Late Prime Minister Meles Zalawi of Ethiopia, for instance, offered large tracts of land for reduced prices, while some investors were offered lease contracts for at least 50 years.(19) These offers were however peculiar, especially given that the land deals concerned land in poor regions where food was already lacking. To date, Ethiopia receives the most food aid in the world.(20)

The Indian Government plays a prominent role in these trends, by implementing reforms that facilitate direct foreign investments and providing trade diplomacy assistance and credit lines through the Exim Bank.(21) In addition, business associations such as the Associated Chambers of Commerce and sector-specific groups like the Consortium of Indian Farmers have actively engaged in lobbying with Government to facilitate foreign direct investments by companies. They have also set up business conclaves and trade fairs.(22)

The impact on the local population

The land deals in Africa have been controversial, with research institutes, scholars, media, environmental- and human rights activists all pointing out the problematic aspects. The claim has always been that these investments in Africa will lead to better living conditions and the creation of jobs. The results, however, can be quite disappointing.

Many investors have introduced mechanised forms of agriculture, which greatly increase productivity. But these machines often replace labour.(23) When this is the case, one can hardly speak of job creation. These land deals have also on occasion resulted in the forceful removal of small farmers, leaving them without land and/or access to water sources.(24) This phenomenon has been described as a ‘land grab’ or ‘power grab’, a trend described by economist Jeffrey Sachs. According to Sachs, “The rise in food prices is leading to a land grab, as powerful politicians sell foreign investors massive tracts of farmland, brushing aside the traditional land rights of poor smallholders. Foreign investors hope to use large mechanised farms to produce output for export, leaving little or nothing for the local population.”(25) But land grabbing as described by Sachs is not a new phenomenon. European colonialism encouraged the takeovers of foreign lands to produce for domestic markets. It is therefore not surprising that the act has been branded as neo-colonialist.(26)

Governments have been seen as repeatedly failing to recognise the rights of those occupying land without formal legal titles. Small communities have for generations inhabited communally held lands, but they often do not hold secure forms of land tenure.(27) Similarly, these communities are usually not sufficiently informed about possible land deals nor are they consulted. The secrecy surrounding these deals therefore leaves local populations without a chance to fight for their land.(28) In this regard, a report by the Rights and Resources Initiative underlines that there is a significant chance that these controversial land deals will trigger civil unrest, as has already been the case in Sudan, Liberia and Sierra Leone.(29)

It has been argued that while some locals do find work on land grab farms, earning somewhat more than they did with smallholder farming, it is still not enough to take care of their families.(30) Additionally, exploitative working conditions, low wages, child labour, and inhuman treatment of workers have also been reported. In 2010 the National Confederation of Ethiopian Trade Unions, for example, specifically pointed out Indian investors for their maltreatment of workers.(31)

Lastly, several environmental problems have resulted from land deals. The large tracts of land that are converted into mechanised mono-crop farmlands require considerable water resources and high levels of pesticides. These pesticides in turn pollute nearby ground water, leading to soil depletion.(32)

India’s land deals in Africa are part of a neo-colonisation reflecting concerns about food security and food stocks linked to the boom in biofuels. Foreign investment in African land is greatly encouraged by the Indian Government and its business associations. More than that, host Governments are actively involved in the land deals, whilst often their own population suffers from it. Despite claims that the rationale for these practices is centred on food security, there is an inherent contradiction in that these deals lead to the export of food from regions where food is lacking.

Food crises, energy demands and growing populations are not considered short-term trends. The issue at stake therefore is the need for a more long-term vision. There will be fierce competition for land and water resources to provide food and energy in the near future. It is thus important that both host Governments and foreign investors recognise this, and acknowledge that land deals often result in social, economic and ecological problems. Governments should implement policies that secure access to land by local inhabitants, and make the process of the land deals more transparent and accessible to locals. This will of course not be easy, especially since the foregoing analysis makes it evident that power struggles exist within these land deals.