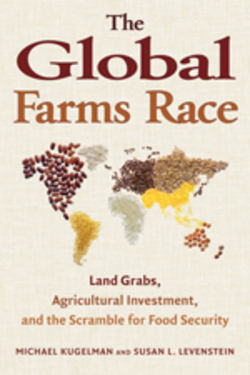 As we struggle to feed a global population speeding toward 9 billion, we have entered a new phase of the food crisis. Wealthy countries that import much of their food, along with private investors, are racing to buy or lease huge swaths of farmland abroad. The Global Farms Race is the first book to examine this burgeoning trend in all its complexity, considering the implications for investors, host countries, and the world as a whole.

The debate over large-scale land acquisition is typically polarized, with critics lambasting it as a form of “neocolonialism,” and proponents lauding it as an elixir for the poor yields, inefficient technology, and unemployment plaguing global agriculture. The Global Farms Race instead offers diverse perspectives, featuring contributions from agricultural investment consultants, farmers’ organizations, international NGOs, and academics. The book addresses historical context, environmental impacts, and social effects, and covers all the major geographic areas of investment.

Nearly 230 million hectares of farmland—an area equivalent to the size of Western Europe—have been sold or leased since 2001, with most of these transactions occurring since 2008. As the deals continue to increase, it is imperative for anyone concerned with food security to understand them and their consequences. The Global Farms Race is a critical resource to develop that understanding.

2. Are We Learning from History?
Derek Byerlee

Appendices
About the Editors and Contributors