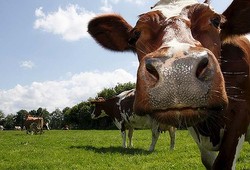 by MATTHEW CRANSTON, AFR
If there was any doubt that China is desperate for agricultural assets, it has been dispelled by the news that China Investment Corp with its $US190 billion war chest is on the hunt all the way down to chilly Tasmania in search of fresh milk.

If anything can describe the pressure the Chinese are under to secure strong long-term food supplies, consider that a litre of milk in Beijing sells for about $7 a litre compared with $1 here. Soybean futures are up 48 per cent this year and no one in China wants to see rapidly rising agricultural prices spilling over into Chinese food inflation.
So the news that CIC is looking to provide $200 million in capital for Van Diemen's Land Company, based at Woolnorth Station in Tasmania's north-west, is no surprise.
What might surprise the foreign investment agitators is that the company is already owned by foreigners – it is New Zealand's $700 million New Plymouth District Council that is seeking the investment partner for its Australian dairying vehicle.
Van Diemen's chief executive and former general manager at rural services company Elders, Michael Guerin, said the potential investor was not just looking to secure food supply but invest in a company for a commercially viable return on equity.
"It's about insuring that both sides of the equity is aligned and we want and need an investor who understands the cycles of agriculture," he said.
China's commerce ministry recently forecast that the country's private companies and wealth funds would invest up to $560 billion overseas by 2015.
But the Chinese are likely to face two problems. The first is getting approval to buy the farm and the political opposition faced there. Second, they will have difficulty securing the right management team that will make the farm productive in the long term.
Look at the last Chinese group that tried to buy into Trans-Tasman dairying.
Milk New Zealand Holding Ltd, owned by Chinese company Shanghai Pengxin, recently won approval to buy Crafer Farms – 16 dairies, totalling 10,000 hectares in New Zealand's North Island. However, that was not before three years of negotiations that went all the way to the country's parliament and resulted in a change in the foreign investment threshold.
There were also 27 stringent conditions attached by the New Zealand government to the deal, including heavying the Chinese into a partnership with the New Zealand government-backed agribusiness LandCorp.
In Australia, the opposition has been just as heated. In the past year, the Chinese government-owned COFCO, led by president Patrick Yu, took control of Tully Sugar, one of the last major sugar assets in Australia, for $136 million. It raised the ire of north Queensland politician Bob Katter whose protectionists policies are popular with his electorate. And don't mention Cubbie Station – Australia's largest irrigated cotton farm which received approval last month from Treasurer Wayne Swan and nearly rewrote the federal opposition's foreign investment policy.
In Western Australia, Shanghai Zhongfu wants the right to farm all 15,000 hectares of land east of Kununurra being developed by the West Australian government
The Western world, however, is not the only place where political opposition to Chinese investment exists. In southern Africa, the Malawi government recently introduced legislation targeted at Chinese traders and many have been forced to close their businesses in rural areas. Some countries complain about the working conditions in Chinese firms and discontent among workers employed by Chinese firms has been used as a political platform in two Zambian presidential election campaigns.
Geoff Kirton, who has been teaching agricultural sciences at China Agriculture University in Beijing since 2006, says the Chinese need to be more aware of the challenges in finding and keeping the right management.
"Currently, one of the things that shocks them is the cost of doing business here. They just don't understand how you could pay someone $140,000 to drive a truck and I know one Chinese builder who was shocked to find that the unions wouldn't allow him to put more than four workers into one room.
"I think that will be a limiting factor for them in agriculture as well," he said.
Growth Farms Australia chief executive David Sackett says the key to success for the Chinese in establishing sources of agricultural security won't be so much about buying the farm as working out the right strategy and management.
Growth Farms manages farms on behalf of some very large offshore investors and this is the key thing to get right.
"Westerners spend a lot more time working out their strategy, whereas we see quite a number of Chinese investors developing their strategy as they go along," Sackett says.
Original source: AFR
TWITTER
FACEBOOK
WHATSAPP
PRINT
E-MAIL
TWITTER
FACEBOOK
WHATSAPP
E-MAIL