Saudi to invest over US$11bn in farmland projects 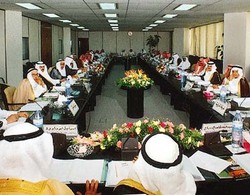 The board of directors of the Saudi Council of Chambers of Commerce and Industry.

Saudi Arabia has invested around 40 billion riyals (US$11bn) in agricultural and livestock projects in the Ukraine, Brazil, Argentina, Canada and Sudan, it was reportedThe projects in the Ukraine, Brazil, Argentina and Canada were announced by Eid al-Ma'arik, the chairman of the agricultural investment committee at the Saudi Council of Chambers, according to Al-Watan newspaper.

The Asharq Al-Awsat newspaper also reported that Fahd Balghunaim, the Saudi agriculture minister, had signed an agreement to increase its investment in agricultural land in Sudan.Balghunaim said earlier this year the kingdom was encouraging Saudi companies to invest in farms in Africa as it seeks to secure supplies of food imports to replace local production.

The government decided in 2008 to gradually phase out all water-intensive crops including grains by 2016 amid commodity price spikes, Balghunaim said at a World Economic Forum meeting in Addis Ababa, Ethiopia's capital.Saudi Arabia plans to increase imports of food, including the 3 million metric tonnes of wheat consumed annually, he said.

"Africa is the region that represents the biggest opportunity to increase food production with vast tracts of land and a big difference between existing potential and current productivity," he said."Saudi companies are bringing the technology and equipment to help increase production."

In Ethiopia, Saudi Star Agricultural Development, a food company owned by billionaire Mohammed al-Amoudi, announced last year it plans to invest $2.5bn by 2020 developing a rice-farming project on 10,000 hectares of land on lease for 60 years.It also has plans to rent an additional 290,000 hectares from the government.

Critics of the project including GRAIN, the Barcelona-based advocacy group, argue that domestic farmers are being dispossessed and the country shouldn't rent land cheaply to foreign investors to grow crops when about 13 percent of its approximately 80 million people still rely on food aid.