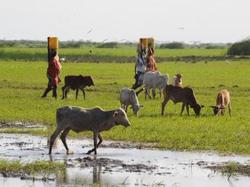 According to residents of the Tana Delta allocation of land to TARDA displaced them to a sub-optimal land, with poor access to water and suitable land for agriculture.

The worlds poorest, a majority of who live in sub Saharan Africa, are especially vulnerable to raising food prices because they spend up to 75% of their income on food. According to the United Nations Food and Agriculture Organization (FAO), the price surges of 2007/2008 resulted in an 8% increase in the number of malnourished people in African.

According to the OECD-FAO Agricultural Outlook 2012, food production needs to increase by 60% over the next 40 years to meet the rising global demand for food. To meet the soaring global demand additional food will need to come from a combination of increased productivity and expansion of farmland.

Globally, the scope for expanding farmland is limited. But with 60% of the world’s unused arable land, Africa’s land is a hot commodity. Foreign investors are scrambling for Africa’s farmland. The pace of purchase or lease of Africa’s is so furious that is now referred to as a “land grab”.

For Wall Street-based private equity firms, the motive is profits. For countries scrambling for Africa’s farmland – Saudi Arabia, India and China, the real value is water. Saudi Arabia does not lack land for food production. What’s missing in the Kingdom is water. Indian companies are doing the same because aquifers across the sub-continent have been depleted by decades of unsustainable irrigation. Africa’s land grabs could be the biggest virtual water export in history.

The huge land deals in Africa involve large-scale, commercial agriculture, which will require large quantities of water and mineral fertilizers. Nearly all of the foreign land deals are located in Africa’s major river basins; the Congo, the Niger, and the Nile Collectively, three of the main countries in the Nile basin – Ethiopia, Sudan and South Sudan – have already leased about 8.5 million hectares. Uganda has leased a total of 868,000 hectares to investors from China, Egypt, Singapore and India.

The Kenya government has granted Tana River Authority (TARDA) tenure rights to 40,000 hectares of the fragile Tana Delta. TARDA, in a joint venture with Mumias Sugar Company seeks to establish sugarcane plantations on the fragile delta. A second company, Mat International is in the process of acquiring 30,000 hectares of land in the Tana Delta. Bedford Biofuels, a Canadian company could secure a 45-year lease on 65,000 hectares in Tana River District, which includes access to water resources, to produce biofuels.

In Lake Victoria, Dominion Farms was granted a lease on 7,000 hectares in the hydrologically vital and ecologically fragile Yala Swamp. These land grabs could hurt smallholder farmers and could undermine national food security objectives. In Kenya’s Yala swamp, where Dominion Farms have a 25-year lease, local communities have lost access to water and pasture for their livestock.

According to residents of the Tana Delta allocation of land to TARDA displaced them to a sub-optimal land, with poor access to water and suitable land for agriculture. The wave of land grabbing is nothing short of an ecological and economic disaster in the making. There is simply not enough water in Africa’s rivers and water tables to irrigate all the newly acquired land.

The ecological and social costs of foreign led commercial agriculture are socialized while the benefits are privatized by big industry. Africa must learn from Asia. Pakistan flooded its way into the Green Revolution. The mighty Indus River irrigates 90% of the country’s crops. Today the Indus River hardly flows all the way into the Arabian Sea. Hundreds of thousands of hectares of farmland are no longer usable due to waterlogging or salinization.

Similarly, India drilled and pumped its way into the Green Revolution. Today India’s annual abstraction of ground water for irrigation is 250 cubic kilometers per year, about 100 kilometers more than can be recharged by rainfall. Transformation of Africa’s agriculture must be predicated on sustainable use of natural capital, especially water.

Improving productivity and efficiency of hundreds of millions of Africa’s hardworking smallholder farmers must be central to this transformation. Investments in industrial scale agriculture must balanced by equitable flow of benefits to smallholder farmers, reducing their alienation and encouraging their participation through access to technology, credit, inputs and markets.