What are the ecological costs of China’s future food imports? 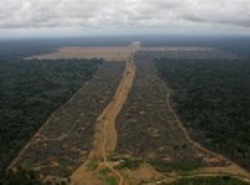 What are the ecological costs of China’s future food imports?

China’s growing agribusinesses and demand for soybeans and meat is bringing intensive farming and the risk of further deforestation in Brazil and beyond. Tom Levitt reports.

“We believe that Chinese investments shouldn’t be too different and should respect the environment.”

The dynamics of Chinese agriculture are changing. While it may still be largely self-sufficient in food, the country is expected to enter an era of rising food imports and in particular, animal feed. But how ready is China to take responsibility for the environmental impact of this growing overseas footprint?

Over the past two decades, China has seen a monumental surge in soybean imports. By 2030, China is expected to consume 72 million tonnes of soybeans from overseas – more than one-quarter of the world’s total soybean production today.

The impact, environmentalists fear, is greater pressure on uncultivated forested land in Brazil, the world’s second largest soybean producer after the United States and a major exporter to China. In 2011, more than 67% of Brazil’s soybean exports were sent to China. By no coincidence, the South American country is now emerging as a major focus of investment for China’s expanding agribusinesses.

Inside China, the country is fast approaching the limit of its own available farmland resources – the so-called “red line” for food security of 120 million hectares of arable land, set by the government. China’s solution, according to Deborah Brautigam, a professor at American University and senior research fellow at the International Food Policy Research Institute, has been to import cheaper agriculture commodities like soybeans and maize while saving its farmland for higher-value exports like fish and vegetables.

The other force driving the rise in soybean and maize imports is a corresponding rise in meat consumption in China. Increasingly that meat is coming from large-scale commercial farms -– not small-scale or household farmers -– and dependent on animal feed rather than food waste.

In a detailed assessment of likely trends for Chinese agriculture in 2030, Laixiang Sun, professor at the School of Oriental and African Studies in London, says he expects to see pig and poultry numbers in intensive farms increase by “at least 2.5 times between 2000 and 2030”. This type of intensive livestock farming relies on cheap agricultural crops.

China's meat demand a new threat to the Amazon?

The rapid expansion of soybean cultivation in Brazil over the past two decades has contributed to huge increases in the rate of deforestation in the Amazon – one of the world’s most biodiverse regions and home to 10% of all species known to scientists.

Soy production accounted for about 10% of total deforestation in the Amazon between 2000 and 2005, according to estimates from Columbia University. In the next five years, that figure dropped to 2% as new production moved to previously cleared cattle pasture.

While it may not always be a direct cause of deforestation, soybean production can still be an indirect driver, suggest observers, by raising land prices, pushing land users into forested areas and creating impetus for infrastructure improvements like roads which, then promote further forest clearance.

"The agribusiness sector wants more. The hunger for development made Brazil the third largest exporter of agricultural products...but the economic model chosen for the region ignores the Amazon environment and its people," says Greenpeace Brazil, which is campaigning for zero deforestation in the Amazon by 2015.

Tragically, the competition for lucrative farmland and resources in the Amazon region is also linked to violence and death. The Brazilian land rights group Catholic Land Pastoral estimate 1,600 activists have been murdered in the Amazon state of Para over the past 25 years. It says the killings – mostly targeted at small subsistence farmers and indigenous peoples - are usually carried out by gunman hired by loggers, ranchers and farmers, just 1% of murder cases have led to convictions.

“A battle has been declared that is expressed in the violence against those considered obstacles to development and progress,” say the Catholic Land Pastoral.

Deforestation has another globally significant impact. As well as being home to critically endangered and unique wildlife and other biodiversity, the Amazon rainforest is also a major carbon sink, absorbing carbon dioxide and helping to stem global warming. Further deforestation could reverse that, with forest clearance resulting in the release of carbon held in the soil and trees.

China’s link to deforestation in the Amazon may not end with imports of Brazilian soybeans, thanks to the growing expansion of Chinese agribusiness companies at home and abroad. Although still relatively small in comparison to US commodity giants like Cargill, the companies have the support of the Chinese government as they seek to buy agricultural assets.

One of China’s largest state-owned feed importers, the Chongqing Grain Group, announced last year it was spending US$500 million (3.2 billion yuan) to build a soybean plant in Brazil, which reportedly, could be followed by a further multi-million-dollar investment in soybean plantations.

Another, Sanhe Hopefull Grain & Oil, is reported to be putting US$7.5 billion (48 billion yuan) into soybean processing facilities in Brazil in a deal that also includes constructing a railroad.

Greenpeace’s Amazon spokesperson Marcio Astrini told chinadialogue he still hoped China’s growing influence in Brazil would not lead to a fall in environmental standards in the country. “We believe that Chinese investments shouldn’t be too different and should respect the environment.”

As they expand their global reach, Chinese agribusinesses are also changing the landscape of farming back home. The new face of agriculture in China is no longer the household farmer but people like Liu Yonghao, president of the US$8.8 billion agribusiness New Hope Group and China's fourth richest person. His company claims to process 750 million fowl and 8.5 million pigs a year and already owns 16 feed factories outside of the country.

Professor Sun still expects small-scale livestock farms to persist, taking advantage of support for their use of local labour in rural areas, where intensive farms have comparatively less need for workers. But others suggest the incentives for such types of farming are fast disappearing.

“I anticipate that large-scale corporations will soon take over the vast majority of China's household pork production (probably in a decade or two),” says professor Li Jian, from the University of Iowa, who has studied the decline of rural pig farming in China.

The accelerated exodus of rural livestock farmers will not only see more large-scale intensive farms - with associated problems of pollution and reliance on imported animal feed - but also bring more people into urban areas, worsening existing urban environmental problems such as air pollution and congestion. The World Bank estimates agriculture’s share of employment will continue to fall, from around 30% today to 12% by 2030.

“Smallholder farmers are capable of producing the food necessary to feed their country, but face increasingly difficult barriers” concludes a recent report, from the international NGO Grain, which campaigns for farmers’ rights.

“Government decisions to rely on agricultural commodity imports serve the interests of agribusiness and its need for cheap sources of feed but threaten the land, livelihoods and local food systems of communities across the globe,” it adds.

After the Brazilian Amazon, Chinese agribusiness is expected to join other international speculators in exploiting forested and biodiversity-rich land across Africa. But, despite a glut of media coverage about “land-grabbing” deals, (some of which has been reported in chinadialogue) Chinese involvement in land deals in Africa is, so far at least, minimal.

“I had an expectation to see much more Chinese involvement in African agriculture. Basically it hasn’t happened. They have been going to Asia and South America instead,” says professor Brautigam. She says high-profile land deals involving sugar plantations in Ethiopia and biofuels in the Democratic Republic of Congo have not progressed, with China sticking to smaller deals, driven by commercial interests rather than food security.

While Chinese interest in agriculture in Africa remains unfulfilled in the eyes of some observers, its investments elsewhere, particularly in Brazil, are growing. It must now decide whether feeding its citizens at home can be achieved without leading to environmental damage overseas.

Homepage image by Greenpeace. Soybean production has been linked to deforestation in the Amazon region in Brazil.