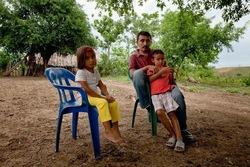 Javier Diaz, with his children at his stepfather’s house near Sincelejo, says he will file a claim to win back the land he sold after receiving death threats. Photographer: Andre Vieira/ Bloomberg Markets via Bloomberg.

The last time Javier Diaz saw his father was when he was 14 and Colombian paramilitaries accused the elder Diaz of supporting guerrillas. That was equal to a death threat at the height of Colombia’s now five-decades-long internal war.
Armed men took his father away in a truck in 1994 and then set ablaze his uncle’s farm and home in a mountainous area of northern Colombia, Bloomberg Markets magazine reports in its October issue.
Death squads, which emerged to protect landowners from guerrilla extortions and kidnappings, suspected that Diaz’s father was paying Latin America’s oldest and largest guerrilla group -- the Revolutionary Armed Forces of Colombia, or FARC -- a tax on his 20 head of cattle, Diaz says. That was proof enough that he was an enemy supporter.
Diaz still doesn’t know what became of his dad. More than a decade later, the threats started again. This time, land speculators told Diaz and his family they would face the wrath of the paramilitaries if they didn’t sell his father’s property. The Diazes promptly turned over the 34 hectares (84 acres) for about $2,000.

“The paramilitaries had accused my entire family of being guerrilla supporters,” Diaz, a farmer and rancher, says at his stepfather’s house, where he now lives. Accordion-infused vallenato music blasts on the radio, and a clucking chicken scurries across the dirt floor.

Diaz is one of 4 million displaced victims caught in the crossfire of a conflict that has involved guerrilla groups, paramilitaries, drug cartels and official government troops. Now, Diaz says he will set out to get his land back.

That’s because President Juan Manuel Santos says he will return property or pay restitution for land that was stolen, abandoned or purchased by intimidation -- as Diaz says happened to his family. Colombia has the world’s second-biggest internally displaced population, after Sudan, according to the United Nations.

Santos’s law, which the Colombian Congress passed in May 2011, took effect in January. The legislation is the cornerstone of Santos’s efforts to finally bring peace to Colombia.

It comes just as foreign and local billionaires such as Brazil’s Eike Batista and Colombia’s Luis Carlos Sarmiento are stepping up investments in remote parts of the nation. They’re encouraged by improved security and a pronounced decline in the cocaine trade.

The government has set a goal of returning to peasants about 20,000 square kilometers (7,722 square miles) of land they once owned. To make the plan work, Santos is directing the land registry to investigate fraud and verify existing property claims.

The law creates a temporary justice system to rule on land disputes dating back to 1991 and puts the burden of proof on current landowners rather than displaced victims. People or companies that knowingly bought stolen land will be required to return it to victims. Those who bought in good faith will negotiate payment of rental fees or other compensation to original landowners.

“A country injured like ours, for so many decades, by absurd violence, by blows between brothers, decidedly needs to walk the road of reconciliation and recognize victims and give them reparations, so that we can move forward,” Santos said on television on Aug. 19.

Diaz says he likes that promise -- and doesn’t trust it. “Will the government really help people like me?” he asks. “I doubt it. They’re more interested in serving big businesses.”

At stake is a country’s attempt to jump-start dramatic change. The president, who took office in August 2010 for a four-year term, plans to distribute land to war victims even before the conflict is fully resolved. At the same time, Santos wants to attract investors in regions once crippled by violence.

With the help of U.S.-financed military aid, as well as tax increases on the wealthy in the past decade, Colombia has reduced cocaine production by about a third and halved the number of FARC insurgents to about 8,000.
Santos said on Aug. 27 his government has held what he calls exploratory talks with FARC rebel envoys that could lead to fresh peace negotiations.

The value of Colombia’s peso has gained 6.5 percent this year and Colombia bonds rose to a record low yield of 6.58 percent as of Aug. 17, the lowest since the securities were issued in 2009. Those factors have spurred foreign investment that drove the country’s growth last year to the fastest in four years.

“Colombia wants investment in a fair social environment in which land stolen from or sold by terrorized peasants at trifling prices has been restored,” says Alejandro Reyes, director of Colombia’s Rural Land Institute and author of a book, Warriors and Peasants, on how land conflicts have spurred Colombia’s armed battles.

“Colombia needs to build a culture of legality and get back large tracts of land that were taken violently,” he says.

Once known as Latin American’s most imperiled country, when Pablo Escobar ran the Medellin drug cartel in the 1980s, Colombia is winning over investors. Standard & Poor’s, Moody’s Investors Service and Fitch Ratings boosted the country’s credit rating in 2010 to investment grade because the nation had become safer for businesses.

Murders dropped by 46 percent and kidnappings decreased by 90 percent during the two terms of Santos’s predecessor, Alvaro Uribe. The former president, who was elected as an independent candidate, served from 2002 to 2010. Santos was his defense minister.

Foreign investment in Colombia will hit a record $17 billion this year, the government predicts. Investors have been wooed by the opportunity to legally buy land at rock-bottom prices and to hire workers hungering for jobs, even at low wages.

CCX Carvao da Colombia, Batista’s coal unit, said it plans to invest $5.5 billion to develop a mine, a railway and a port project in Colombia and is waiting for regulatory approvals. Sam Zell’s Chicago-based Equity International is betting on real estate with a $75 million investment in Bogota-based Terranum, a commercial builder.

Grupo Carso SAB (GCARSOA1), the Mexico City-based global conglomerate controlled by billionaire Carlos Slim, bought a 70 percent stake in February 2011 in a company with a contract to explore and produce oil in Colombia’s eastern plains. That’s a region near the border with Venezuela where guerrillas still battle with soldiers.

Sarmiento, Colombia’s richest man, is putting his money on palm oil and other crops in the eastern plains.

While the wealthy are convinced the state is no longer in danger of collapse and major cities no longer feel like war zones, Uribe’s security improvements didn’t take on the causes of the conflict, says Heather Berkman, a political-risk analyst at Eurasia Group in New York. Santos’s law attempts to, she says.

“The overall move from Colombia as a pariah state marked by acts of terrorism and drug trafficking to one where a government is making more of an effort to address deep-rooted problems is a huge step,” she says.

Reyes says the new law reduces the risks that had been spooking investors. The legislation is intended to prevent pullouts like that of Body Shop International -- a unit of the world’s largest cosmetics maker, L’Oreal SA (OR) -- which cut off its palm supplier in Colombia in 2010.

A report commissioned by Body Shop cited the presence of paramilitaries and squatter invasions. The company didn’t return calls and e-mails requesting comment.

“I move every 20 days,” Rodriguez says. “Staying in one place is too dangerous.”

Diaz says that the claim he’s preparing to file will pit him against Cementos Argos SA (CEMARGOS), Colombia’s biggest cement maker. Diaz says the land his family was forced to sell now belongs to Argos. In deciding whether he should get his home back, Diaz says he thinks the government will side with Argos, not him.

Argos says its spending in Montes de Maria is reviving the local economy. Argos’s purchases in the region to grow teak trees, which can be contested under the new law, have been assailed by opposition lawmaker Ivan Cepeda. He questions how a company could buy land in good faith in a region with a recent history of human rights abuses and mass displacement.

“Some of the massacres took place right where Argos is now developing its reforestation project,” Cepeda says. Argos denies any wrongdoing and says it bought its land at fair prices and in good faith after completing title studies.

Death squads in the Montes de Maria region executed more than 300 people in a series of 50 massacres between 1995 and 2005. About 140,000 people abandoned their homes to flee the violence.

In one of the bloodiest in 2000, paramilitaries using helicopters rounded up suspected guerrilla collaborators in the town plaza of El Salado, where they tortured, chopped up and raped them in broad daylight, according to a government- commissioned report.

The killers refused to let victims take away corpses of family members being feasted upon by vultures and pigs.

“One can make important changes in a place like this,” says Sergio Osorio, the sprightly head of agroindustrial operations at Argos. He’s driving along a bumpy dirt road that cuts through the region’s unforgiving topography.

His work often takes him far from company executives in air-conditioned headquarters in Medellin to the dusty ranches in Montes de Maria, where Argos’s teak plantation qualifies for funding under a UN carbon offset program.

“It would obviously be easier not to be here at all,” Osorio says. “Despite the difficulties, we see great opportunity.”

The law also brings new risks. Former President Uribe has created a group to challenge Santos for re-election. Uribe says the law could put a damper on investment because it burdens those who buy land to prove they did it legally.

Business leaders are organizing new paramilitary groups in northern Colombia, like the one stalking Rodriguez, to oppose enforcement of the act, says Ariel Avila, a conflict researcher at Fundacion Arco Iris.

Still, Santos’s law has enormous potential, says Jose Miguel Vivanco, executive director for the Americas at Human Rights Watch. The real test will be whether those who lost their land wrongly can get it back, he says.

The Santos government has already received 18,500 claims for 1.5 million hectares. No property has yet been given back to previous owners. The government has paid 330 billion pesos in reparations to 55,000 victims.

“Santos must take urgent measures to protect displaced communities from the powerful armed groups and local interests that oppose restitution,” says Vivanco, who’s based in Washington.

On a muggy December afternoon, Diaz trudges up a dirt road outside his stepfather’s house, pausing at a hilltop as the sunset bleeds red across Montes de Maria’s landscape of endless knolls.

Diaz points toward the horizon of Argos-owned land, where he can almost make out the site his family once owned. He fears that Santos’s promise of land restitution won’t be easily delivered. About half of private land in Colombia is in the hands of one percent of property owners, according to a U.N. report.

“We’ll see if this law is really for the victims,” Diaz says.