Malaysia's Felda surges 20 percent in debut of world's No.2 IPO 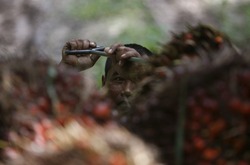 Malaysia's Felda surges 20 percent in debut of world's No.2 IPO

The firm raised $3.1 billion in Asia's biggest initial public offering of this year, running against the global gloom in IPO markets and giving the government a political dividend ahead of what is likely to be a closely fought election.

Hundreds of thousands of plantation farmers and family members will reap a windfall through IPO-related handouts and discounted shares, helping Prime Minister Najib Razak ahead of the election he must call by next March.

The strong debut beat market expectations of a first day pop of 10 percent and brushed aside, for now, a widely flagged 36 percent drop in Felda Global's first-quarter profit to 223.2 million ringgit ($70 million) that unnerved some investors.

"The successful listing of Felda today signifies the endurance of our local stock exchange and proves the IPO market in Malaysia is powerful," said Ahmad Maslan, a government minister in charge of Felda Global's parent - the Federal Land Development Authority.

"The share price performance is quite fair," said a plantations analyst with Public Investment Bank who asked not to be identified.

Felda's earnings should rise by 10-15 percent over the next two financial years, the analyst said, as it expands its downstream operations, which yield higher profits than traditional harvesting of palm fruits.

Felda Global executives said second-quarter profits would be better - as long as crude palm oil prices stay around 3,000 ringgit - as the firm had factored the bulk of its fertiliser costs in the January to March 2012 period.

Palm oil prices, which have more than tripled over the past decade, have held above 3,000 ringgit for much of 2012 on robust Asian food demand. That has helped Felda join investor watchlists of plantation firms dominated by Singapore's Wilmar and Malaysia's Sime Darby.

On the downside, the burden of replanting ageing oil palms on the estates Felda manages - a key reason for its lower profits - may leave Felda Global with less to invest in its expansion plans from Southeast Asia to Africa.

Felda debuts into a Malaysian stock market .KLSE that has risen more than 4 percent this year, outperforming a rise of less than 1.5 percent in the MSCI Asia ex-Japan index .MIAPJ0000PUS but lagging Southeast Asian peers such as Thailand .SETI.

Its bullish debut underlines how the state's heavy hand in Malaysia's economy and the support of local investors have insulated the country's IPO market from the gloom that has affected flotations elsewhere. A string of IPOs have been delayed or scrapped due to investor worries about the European debt crisis and a slowdown in China.

Earlier this month, motor sport racing company Formula One delayed a Singapore IPO worth up to $3 billion, while London luxury jeweler Graff Diamonds has ditched its $1 billion IPO.

Malaysia's status as a hub of IPO activity this year is set to be enhanced by the planned $2 billion IPO of IHH Healthcare - a unit of Malaysia's state investor Khazanah - at the end of July.

Felda's listing plans were initially met with resistance from the farmers who partly owned the firm and feared the loss of control of an asset they had invested in for generations.

The government, a key shareholder in the firm via state-linked funds, sweetened the deal with windfall payments generated from the a fifth of the IPO proceeds.

To keep the farmers happy, government-linked funds and the domestic pension fund, which accounted for part of the institutional tranche, made a rush for the stock during the book-building process.

"This Felda IPO is an embarrassment," said an official with a Malaysian bank-backed fund management firm. "About 23 percent of the book was allocated to 'friends and family', all at the expense of legitimate investors with potential synergies."

Global trader Louis Dreyfus ended up with a 0.5 percent slice of the IPO as a strategic investor after it was promised a 2.5 percent stake as part of a refining and marketing alliance with Felda Global. Officials from the Malaysian firm say the cut in Louis Dreyfus's stake will not hurt their relationship.

Felda Global's appeal has attracted other cornerstone investors - including Qatar Holding LCC, a unit of the Gulf nation's sovereign wealth fund, and Hong Kong's Value Partners - who are locked into the shares for six months.

Felda Global plans to use the bulk of its proceeds to snap up more plantations in Southeast Asia and Africa and boost its refining and market business in its bid to become a peer to Archer-Daniel Midlands  and Cargill by 2020.

But it could stumble with replanting its ageing oil palm trees that account for 53 percent of the 320,000 hectares of oil palm estates it has taken up in a lease from its parent - among the highest in the industry.

Replanting means loss of income for the three years it takes for trees to mature. But if Felda Global Group delays replanting, it's revenue will eventually trickle lower.

"If they aren't able to increase their yield for the past 10 years, how are they able to do it in the next three years," said a palm oil analyst with independent research house in Kuala Lumpur.