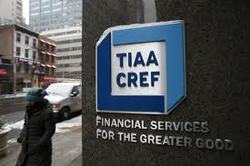 May 14 (Reuters) - Financial services group TIAA-CREF, which is a major agricultural investor, said on Monday it is partnering with Canadian and European money managers to form a $2 billion global farmland investing company to capitalize on the growing demand for grains and other agricultural products.

U.S.-based TIAA-CREF, which also provides retirement services and has about $487 billion in assets under management, said it and several international institutional investors had $2 billion in commitments to invest in farmland in the United States, Australia and Brazil, all key grain exporters.

A TIAA-CREF affiliate will manage the TIAA-CREF Global Agriculture LLC.

Investors include AP2, one of the largest pension funds in northern Europe with about $32.1 billion under management; British Columbia Investment Management Corporation (bcIMC), an independent investment management company that manages about $91.6 billion; and the Caisse de dépôt et placement du Québec, which manages funds for public and private pension and insurance plans and has about $161 billion in net assets.

Growing demand for protein in developing economies and alternative energy mandates are helping to raise demand for agricultural products used for food, fiber and fuel and driving investment in farmland, said Jose Minaya, managing director and head of global natural resources and infrastructure investments at TIAA-CREF.

"Direct investment in farmland provides access to the key driver of food production," he said.

Farmland prices in several key U.S. farm states are currently at or near record highs amid an agricultural boom.

TIAA-CREF currently manages about $2.5 billion in more than 400 properties totaling 600,000 acres of farmland in the United States, Australia, South America and Eastern Europe.

For Quebec's Caisse, the deal marks its entry into farmland investing.

--Amount raised by TIAA-CREF among largest for agriculture-specific investments

--Capital to be invested in the U.S., Australia and Brazil

(Updates with areas of investment in the second paragraph, comment by executive in the 10th paragraph and research on return in the 11th.)

TIAA-CREF Global Agriculture LLC, which was set up as a company instead of a fund, began investing in April 2011 and focuses on farmland in the United States, Australia and Brazil. It aims to invest about 70% of the $2 billion in land that grows annual crops like cotton and soybean and the remainder on land for permanent crops like apples and almonds.

It counted among its investors the Second Swedish National Pension Fund, or AP2, the British Columbia Investment Management Corp. and the Caisse de Depot et Placement du Quebec. The statement didn't cite the size of their individual allocations.

Investing in real assets, including residential and commercial properties and farmland, has seen increasing interest recently as investors position for an expected end to the current low-interest-rate  regime.

Some investors believe rates may climb after 2014, as the Federal Reserve and other central banks raise rates to contain inflationary pressure from aggressive monetary easing.

"We believe farmland offers investors excellent portfolio diversification given its low correlation to traditional asset classes like stocks and bonds. Farmland also acts as hedge against inflation within a portfolio," Minaya said.

He added that by buying farmland, investors also tap into the cash flow of a highly fragmented market where 99% of the supply is in individual farmers' hands.

Returns can be lucrative. HighQuest Partners LLC, a consultancy focused on agribusiness and agriculture investing, said in an information package sent to investors last month that the sector generates a historical real return of between 8% and 10%, more in less-mature markets and "likely better in the next decade."

Some investment and hedge fund managers have set up closed-end funds with several millions to around $100 million in capital to capture the opportunity, but there are few large funds specifically dedicated to agriculture. Teays River Investments LLC, whose Ag Real Value Fund raised $478 million in July 2010, was the most recent large fund that invests specifically in the sector, Preqin said.

TIAA-CREF Global Agriculture underlies the company's continuing efforts in global agricultural investments. TIAA-CREF, set up in 1918 to provide retirement income for professors, is among the world's largest agriculture investors. It manages $2.5 billion in high-quality farmland in major grain-producing regions, including the United States, Australia, South America and Eastern Europe.

TIAA-CREF partners with local farmers and operators to manage and farm the properties, typically by leasing the land to farmers.

TIAA-CREF, the leading provider of retirement services in the academic, research, medical and cultural fields, had $487 billion in assets under management as of March 31.