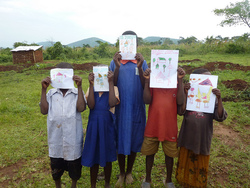 According to Oxfam’s research released in September 2011, at least 22,500 people, have lost their homes and land to make way for a timber company in Uganda. (Photo: Oxfam)
Reuters | May 9, 2012

KAMPALA, May 9 (Reuters) - Uganda has threatened to kick out Oxfam after the British charity accused the government of complicity in violent land grabs for commercial gains, according to the interior ministry.

The ministry has told Oxfam and the Uganda Land Alliance, they will lose their operating licenses if they do not retract and apologise for accusations that more than 20,000 people were evicted to make way for an international forestry company.

"(This) has ... generated unnecessary malicious attacks against the person of the president and brings the presidency into disrepute in a manner that is inconsistent with national laws," the ministry's National NGO Board said in an undated report on an investigation into the organizations.

A retraction of the accusations, made in a September report, and apologies to the president and the ministry are preconditions for the two charities to keep their licences and the work permits of their staff, the board said.

Oxfam confirmed receiving the ministry's report and its Uganda country director, Ayman Omer, said the charity would respond within an agreed time frame.

Deo Tumusiime, a spokesman for the Uganda Land Alliance, said it and Oxfam had been summoned by interior minister Hilary Onek on April 26 but that there were no grounds for an apology.

"We do not really see any need to apologise because there are issues on the ground that we think need urgent attention," Tumusiime told Reuters on Wednesday. "People have lived on this land for quite some time and have now been chased away."

The report said that 22,500 Ugandans living in the Kiboga and neighbouring Mubende districts had been thrown out of their homes to make way for UK-based New Forests Company (NFC).

Residents told Oxfam the security forces were deployed in 2010 to enforce the evictions, on occasion setting fire to homes and crops and in some cases beating and imprisoning people.

The Oxfam report said NFC had planted or harvested timber on 27,000 hectares (66,690 acres) in Uganda, Tanzania, Mozambique and Rwanda on what had been classified as "under-utilised" or "degraded" land, and deals in those countries had encompassed 90,000 hectares (222,230 acres). (Editing by Richard Lough and Mark Heinrich)