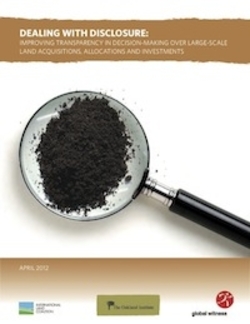 Since 2008, the rush for land in developing countries has rapidly intensified but the sector remains largely unregulated and land deals are frequently agreed in secret between governments and investors. Such a lack of mechanisms or political will to ensure transparent, accountable, and equitable decision-making in the acquisition and allocation of land concessions undermines governance and the democratic process. It fosters an environment where high-level corruption between political and business leaders prevails, where elite capture of natural assets becomes the norm, where human rights are routinely abused with impunity, where environmental destruction is ignored and where investment incentives are stacked against companies willing to adhere to ethical and legal principles.

The report, Dealing with Disclosure, launched today by Global Witness, the International Land Coalition and the Oakland Institute, looks at why it is vital to transform the secretive culture behind large scale land deals and, for the first time, sets out in detail what tools governments, companies and citizens can harness to ensure that this happens.

The report’s key recommendation is that all contractual information be made publicly available unless investors or governments can prove that this would harm commercial competitiveness or public interest – a principle it calls “if in doubt, disclose”. Companies should have to prove they are doing no harm, rather than communities with little information or power having to prove that a land deal is negatively affecting them.

It also reveals how opening up the process around large-scale land deals would not only benefit local communities but also governments and investors. Whilst investors would enjoy a level playing field as well as reduced risks of corruption and expensive and damaging conflicts with communities, greater transparency would enable governments to make more informed decisions and negotiate better deals when allocating commercial rights to land.