Letter of solidarity with the farmers movement in Honduras 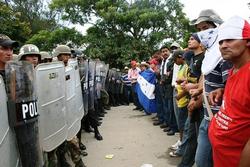 On the International Day of Peasant Struggle, April 17th, in Honduras massive land occupations have started by peasants.  More than 12 000 hectares in at least six departments that were occupied by about 3000 farm families. The avalanche of criticism against the coordinator of La Via Campesina Central America  Rafael Alegría were unexpected and today most media accuse our friend Rafael Alegria to invade private land, jeopardizing the domestic and foreign private investment.

La Via Campesina in solidarity with the farmers movement in Honduras, recalls that in the final declaration of the International Conference Nyeleni against land grabbing a commitment was given  to "support the control by people of their natural resources through land occupations , occupations of companies and corporate investors, protests and other actions to mobilize the masses to claim their commons."

If these families have made the decision to recuperate land with all the risks involved for them, we support them so that they  do not continue to live in extreme poverty and can engage in the production of food for  thier survival. According to a report of CEPAL/FAO in December , 2011, 68% of the rural population in Honduras lives in poverty.

La Via Campesina calls upon its organizations and other social movements to express their  solidarity with peasant families and send letters to the Government of Honduras to approve the proposed comprehensive agrarian reform law that the peasant movement has presented to Congress in October , 2011.

La Via Campesina also requests the government of Honduras to stop promoting the use of public and paramilitary forces to repress peasant families and especially to respect the physical integrity of people who struggle for land. We reject all forms of violence and the criminalization of our struggles and mobilizations in defense of our rights,

On the 17th of April massive land occupations have taken place in Honduras. Because of this Rafael Alegria and other leaders are under threat. We ask you to send protest letters to the Honduras government with copy la La Via Campesina.

please send them to the following addresses:

with copy to La Via Campesina - Centro America  [email protected]