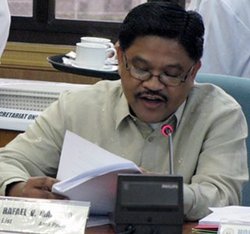 A LEGISLATOR representing the farmers has called for an investigation, in aid of legislation, into the $50-million joint-venture deal between the Kingdom of Bahrain and the AMA Group Holdings to operate a 10,000-hectare agricultural farm in Mindanao, which he fears would displace thousands of farmers in Mindanao.

In House Resolution 2159, Party-list Rep. Rafael Mariano of Anakpawis urged the House of Representatives’ Committees on Agriculture and Food and on Good Government to conduct a joint inquiry to determine if the project will bring prosperity to the people of Mindanao.

Mariano said that in 2010, AMA Group Holdings entered into a joint venture with Bahrain’s Hassan Group in a project called “RP Harvest,” to cultivate bananas, rice and other crops on 10,000 hectares of land in Davao del Norte in Mindanao.

AMA Group Holdings is owned by the family of Amable Aguiluz V, who serves as the country’s special envoy to the Gulf Cooperative Council (GCC).

Mariano said the deal may be violative of Republic Act 3019, which provides that “it is unlawful for any person having family or close personal relation with any public official to capitalize or exploit or take advantage of such family or close personal relation by directly or indirectly requesting or receiving any present, gift or material or pecuniary advantage from any other person having some business, transaction, application, request or contract with the government, in which such public official has to intervene.”

“It is not only our people that are at stake but also our national patrimony,” Mariano said.

Mariano said the land-lease deals, which will allow foreign countries to use vast tracts of land in the country, will further intensify landlessness, poverty and hunger in the countryside.

“It is also foreseen that joint ventures of this kind will fuel agrarian unrest and face intense resistance from farmers,” Mariano said.

Mariano said the deal was signed in Bahrain in January 2012 by Nadir and Ibrahim Sons of Hassan Group and the AMA Group Holdings “as an agriculture investment expansion project to ensure food security and promote the role of private companies in the agribusiness sector.”

Reports, however, said that AMA Group Holdings is claiming that the project will not push through because the land is not suitable for such agricultural products.