Trigon lifts landbank near to 200,000 hectares 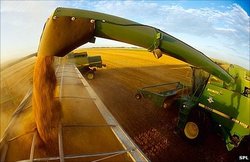 Trigon Agri, in its second acquisition this month , raised its Black Sea landbank nearly to 200,000 hectares, in a deal the farm operator said would "substantially upgrade the quality" of its Russian portfolio.

Trigon, which last month said it was in "advanced negotiations to acquire a very attractive large-scale farming operation in Russia", revealed it had purchased an "exceptional" 30,000-hectare farm in Rostov, in the south of the country.

The company agreed to pay for the deal in part with E16m in cash, or new shares, and in part with 18,500 hectares of its existing land, in Samara, further east, and most distant from Russia's important Black Sea ports.

Indeed, Trigon said that much of the appeal of Wednesday's deal, rested on the site's easy access to Novorossiysk, Russia's main grain export port.

"The proximity to this port leads to high average prices received for the sale of grains," Trigon said, noting that prices Russian farmers receive for crops "vary considerably depending upon the distance of the sale location from the main ports".

This dynamic has been particularly evident in 2012, during which Russia has been unable, after depleting supplies close to port, to maintain the price competitiveness it achieved in the second half of last year, when it won a series of high-profile grain export deals.

The acquired land also offered a "contiguous layout", minimising the distances that farm equipment needs to travel and cutting down costs.

Furthermore, the plot has irrigation potential, Trigon said, flagging access to a network of water channels "unique in the region".

"These three factors together allow the farm to have a very high profitability potential," Trigon said.

Indeed, Ulo Adamson, the group's chief executive, said the site could, in profitability terms, "potentially even outperform our operations in Ukraine", where Trigon achieved yields of 3.0 tonnes per hectare last year, 50% more than it managed in Russia.

"The planned transaction allows us to substantially upgrade the quality of our land portfolio in Russia," Mr Adamson added.

The group was unavailable for comment when Agrimoney.com called earlier for further details on the deal, including on the seller.

The deal, which is expected to close during the July-to-September quarter, follows the purchase three weeks ago of the biggest dairy farm in Estonia.

Trigon plans to become the "largest dairy producer in Europe, including Russia", although it faces competition on this score from operators such as Ekosem-Agrar and Olam International, which have also unveiled expansion drives.

Indeed, further deals may be forthcoming, with the group stating last month that it expected "to announce a number of new acquisitions" in dairy by the end of May.