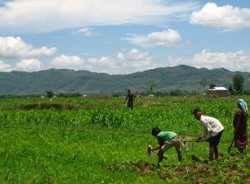 The right to work the land is directly related to the food security of many communities around the world, constantly at risk of being taken away by international investors. Photo: The Advocacy Project.

Three years of negotiations on guidelines to govern the tenure of land, fisheries and forests (commonly referred to as the Voluntary Guidelines, or VG) came to a successful close on Friday, March 9 in Rome. Under the auspices of the newly reconfigured Committee on World Food Security (CFS) (housed at the FAO with a secretariat shared among the FAO, the World Food Program and the International Fund for Agriculture and Development, or IFAD), the negotiations were contentious and important.

Ninety-six governments, accompanied by U.N. agencies, civil society organizations, farmer organizations and private sector representatives worked through three rounds of negotiations over as many years to come to agreement. The talks were chaired by the United States, whose negotiators earned the praise of the participants for their commitment to finding agreement across often significant divides. The conclusion of the VGs (see the FAO press release) marks an important step towards providing some protection for small-holders and communities around the world, who have found their productive assets (arable land, or fishing waters, or forests) under siege by a wave of investor interest from private companies and wealthy food importing countries.

The problems are serious and urgent. A number of CSOs have documented the issues—including GRAIN, who have documented the problem since it exploded in 2008 (most recently here); Oxfam, who published a detailed report last year as part of their GROW campaign; FIAN, who led the CSO input into the negotiations; and, the Oakland Institute who have a series of reports on land investments in Africa. IATP wrote about land grabs in 2009, in an article that was then published in a book, which has been revised and updated for re-release later in 2012. In an overview paper co-authored by IATP and GDAE on what needs to change to avoid another food crisis, a freeze on land investments until stronger laws are in place was one of the three top recommendations.

No one is going to be wholly satisfied with the outcome. Land grabs, as they have been popularly named, have exploded since the 2007-08 food price crisis. The estimated number of acres involved is now well over 200 million acres—an area approximately the size of Western Europe—much of it in the world’s poorest countries, home to some of the hungriest people, in places where food aid deliveries are not uncommon. And they are guidelines, not law. They will not end the documented abuses of communities’ rights. It is only a beginning.

But the VGs are important. They represent the first negotiated agreement on what should be going on, and thereby create an international standard. They were negotiated under the auspices of the CFS—a newly recreated multilateral forum to focus on food security issues that is still proving its worth, particularly to sceptical donor countries. It matters that the CFS succeeds, and it is heartening that it did. It matters because it is one of the most exciting experiments in serious engagement with civil society to set policy that exists in the U.N. system. And it matters because the CFS has a comprehensive mandate—which is the only way governments will be able to transform agriculture and food systems to eradicate hunger and ensure sustainable production for our children and their children.

The CFS is expected to adopt the VGs in May. Then for part two: laws with an enforcement mechanism. National laws, because that is where it really counts. And multilateral rules, too. Not multilateral rules premised on giving all firms equal rights to all countries’ resources. Private companies should make their case to each national government and work within that national government’s laws (and the laws of the state in which they are headquartered). Rather, multilateral rules must reinforce and uphold existing international norms, including the right to food, the principle of prior and informed consent, and the laws set out in international labor and environment conventions. The multilateral rules should provide a strong framework to guide national laws and discipline foreign investors.

The final text will be posted online soon, first in English and then translated into the other official U.N. languages (French, Spanish, Mandarin, Russian and Arabic). The Civil Society Mechanism to the CFS tracked the negotiations and outcome and will have updates here (http://cso4cfs.org/).